So you’ve made the plan, booked the flight, and are headed to the Maghreb. You’re probably excited and maybe even scared. If you’ve never been to Morocco, you will be unsure what to expect. Going to a new country is undoubtedly an exhilarating and confusing experience. With this newcomer’s guide to Morocco, you’ll find tips to help ensure that your trip to Morocco goes as smoothly as possible.

Regardless the time of year of your trip, Moroccan weather can be varied. You can experience chilly mornings, followed by hot afternoons, and even frigid evenings and nights. During the rainy season, things can be downright cold and damp. In the summer, they can be unbearably hot. Be prepared by packing the right variety of clothes.

Other Essentials to Bring to Morocco

Leave designer bags at home and instead bring a fanny pack, cross body bag, or other similar bag that can be worn over a shoulder and across or around the body. Not only do such bags minimize the risk of having things stolen, they allow you to keep both hands free while securely carrying money and other important items such passports, bank cards, identification and room keys.

Some other essential items to bring to Morocco and carry around with you are:

Morocco is still very much a cash-based society, so you’ll want to familiarize yourself with Morocco’s monetary system. You’ll need to keep cash on hand to pay for all sorts of things from taxi fares to street food to market finds.

Moroccan currency is the dirham. It’s often written as DH, Dh or MAD. Although the exchange rate fluctuates, 10 Moroccan dirhams is roughly equivalent to 1 US dollar. One dirham can be divided into 100 centimes (cents), formerly called francs.

For the purpose of making small purchases and taking taxis, you will want to make sure you always carry enough small change. Taxi drivers will rarely (if ever) have change for 200DH or 100DH.

If you plan to use your ATM card in Morocco to withdraw cash, make sure you’ve notified your bank back home that you’ll be traveling. This helps avoid international restrictions on your debit card. Some banks automatically freeze card usage if they notice mysterious activity outside of the country. This happened to me and it was a pain in the butt. You will definitely want to avoid this.

ATMs are widely available in Morocco, but more so in cities. It isn’t unheard of for ATMs to be either low in cash or empty on weekends or holidays. Some flat out reject transactions from a foreign bank. So make sure you plan accordingly and have a bit of extra money for the unexpected. Also do the same if you are planning a trip to the countryside where ATMs will be much harder to locate.

A debit card should only be used for the purpose of withdrawing money from an ATM. Although it is slowly changing, most small establishments do not accept debit or credit card payments. Even if you stumble upon them, it’s probably safest to pay in cash or use an actual credit card that won’t hold you liable for fraudulent purchases.

If you prefer to bring cash from home for your trip to Morocco, you can have it exchanged into dirhams at the airport upon arrival. You can also exchange money in national banks and at exchange bureaus which are often located in many of the larger cities. Keep in mind that before you go home you will want to change your remaining dirhams back into your home currency.

How to Communicate in Morocco

There are several languages spoken in Morocco. Due to its colonial past and long-lasting connection to France, most Moroccans speak at least some amount of French. English is growing in popularity among younger Moroccans, and Berber languages are heavily used certain regions.

However, the most common tongue in Morocco is Moroccan Colloquial Arabic (Darija). I recommend learning a few key words and phrases for your travels. These can be learned phonetically—I learned this way—so no need to labor over learning to read and write the Arabic script.

You’ll find some online resources for learning basic words and phrases in Darija. Or, consider purchasing a Darija language book or phrasebook to use at home and bring along with you. Some suggestions are: 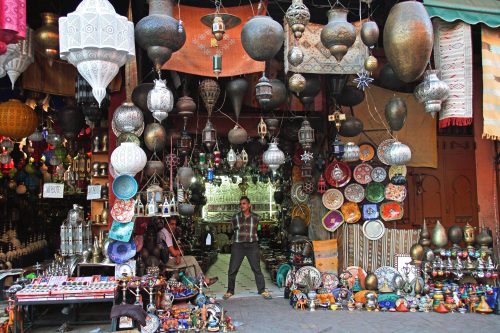 Shopping in Morocco can be one of the most exciting but frightening experiences. Language issues aside, navigating the Moroccan souk can be incredibly intimidating. The sights, the sounds, the crowds, the pushy shopkeepers—it can be overwhelming.

So, here are a few tips to help you on your day at the souk.

For travel within Morocco, you have a few options, depending on whether you need to get around locally or travel to a different city. Casablanca, Rabat and Tangier have added tramways in recent years, which some travelers may want to try. Most travelers, however, will use private transportation or taxis to get around various cities.

There are two types of taxis available in Morocco—grand taxis (large white-colored  vehicles) and petit taxis (small cars which vary in color according to city). Both types of taxis might pick up other passengers while en route to your destination.

The primary difference between the two is that petite taxis are for use within the city and grand taxis will take passengers outside of city limits, sometimes for long distances. It’s not unheard of, for example, for someone to travel to a neighboring city using a grand taxi.

Petite taxis will carry a maximum of three people besides the driver. People picked up together for one destination will generally pay one fare, while people picked up as separate passengers will each pay their own fares.

Petit taxis have meters (compteur in French), and you’ll want to insist that the driver use it. It’s all too common for tourists to hear that it’s broken or to be told a flat fare so that the driver can overcharge them.

Grand taxis, on the other hand, charge a flat fare per person, regardless of the destination or if they are traveling as a group. They tend to have set routes and drivers don’t deviate much off them if at all. So while you can catch a petit taxi in most city neighborhoods, grand taxis tend to stick to main roads.

Grand taxes generally try to fit as many people as possible inside the car. This might include three passengers up front and four in the back. However, passengers may pay for additional spots to avoid being pressed up against a stranger.

For comfort and security, foreigners choosing to use a white taxi are advised to pay for all seats, even if traveling alone. This is to avoid having to be squeezed in with a group of strangers who may or may not be well-intended.

Additionally, there are buses available for travel between cities. CTM is a popular bus line that offers comfortable, air conditioned trips to nearly every city in Morocco. You can check the CTM website for exact routes and fares.

Traveling by Train in Morocco

For more distant travel, there is of course the national train. You can find out more information about routes, fares, and travel times at the ONCF website. (Please note the website is in French.)

ONCF also operates a high speed train (Al Boraq) that travels between Casablanca and Tangier, shortening the travel time to around two hours. This is great if you want to plan a day trip from one city to the other.

Now that you’ve read the most basic and practical pieces of advice for people coming to Morocco for the first time, I hope you feel more informed and a little more prepared for your trip. Safe travels and b’ssaha—to your health!

Jessa Howard is a freelance writer from the US. After moving to Morocco in 2011, she developed a love for everything Moroccan. She enjoys sharing her knowledge and experiences with others.