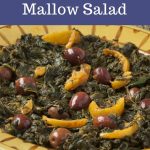 Moroccan Mallow Salad is a tangy, delicious, and sometimes spicy dish of steamed and sauteed mallow greens. Moroccans refer to both the mallow plant and the salad as khoubiza or bakkoula.

The mallow salad is prepared by washing and chopping mallow leaves and stems, steaming them until tender, then sauteeing the mallow with parsley, cilantro, garlic, olive oil, spices, and lemon juice.

These herbs and spices combined are essentially chermoula, a marinade and cooking style or flavor profile that shows up repeatedly in Moroccan cooking.

Mallow itself isn’t particularly flavorful, so it’s the chermoula seasoning that really lifts khoubiza or bakkoula salad with zesty goodness. How zesty or spicy depends on the cook.

The chopped pulp (and optionally the rind) of preserved lemons are traditionally mixed in for tangy flavor, with some cooks also adding chopped olives.

My family also enjoys the salad with a little heat, so I include ground cayenne or whole chili peppers with the seasoning.

According to the journal article Edible Weeds In Morocco, mallow is one of 17 different types of weeds that Moroccans include in their cuisine. Little mallow is the most prevalent type that’s consumed, bought, and sold in Morocco.

Despite being classified as a weed, mallow is actually a nutritious plant that’s rich in Vitamins A, B, and C as well as the minerals magnesium, potassium, and calcium.

You can find mallow sold in some Moroccan markets and grocery stores, but you’ll also see people gathering the plant from the wild, especially during the spring when it grows in abundance.

It’s also not uncommon to see Moroccan women picking mallow wherever they happen upon it—fields, along roads, or in empty lots—then taking it home to prepare mallow salad for their family.

Other greens such as purslane, spinach, and beet greens—alone or in combination—can replace the mallow to make an equally delicious salad. They receive essentially the same treatment as mallow but fragile greens like spinach will require less steaming time while purslane might require more.

Both purslane and mallow are mucilaginous, which can be discernible in cooked salads. I don’t find it off-putting, though, as I do with okra.

Mallow is quite easy to steam, but in order to work with a voluminous quantity, you’ll want to have a good-sized steamer so that you can manage it in a single batch.

Finely chop the leaves and stems then transfer them to a steamer basket placed over simmering water.

It’s okay if the chopped greens are heaped or piled above the rim of the steamer; they’ll quickly reduce in volume as the greens steam and wilt.

Once tender, you can squeeze out excess water from the greens by pressing them against the side of the basket with a large wooden spoon, ladle, or spatula.

If you have a couscoussier you can go ahead and use that for steaming mallow, but if not you might want to invest in a steamer with at least a two-quart capacity. I find a two- to three-quart steamer basket to be a great general-purpose size, and I use mine for steaming all kinds of veggies and greens.

A universal steamer is a good alternative if you don’t want to add a bulky 2-piece pot and basket to your cookware collection.

Moroccan salads such as khoubiza or bakkoula are usually served on small dishes which might be shared communally — usually one small plate between every two or three people.

Whole olives and slivers or wedges of preserved lemon are traditionally used to garnish the dish. They do add a nice pop of color, plus they’re tasty as condiments.

Like many other Moroccan salads, khoubiza or bakkoula is usually eaten as a dip with Moroccan bread. 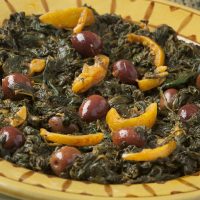 Wash, Chop and Steam the Mallow

Tried this recipe? We’d love to know!Mention @tasteofmaroc or tag #tasteofmaroc!
Leave a Comment or Review