Chermoula or charmoula (شرمولة) is the emblematic marinade of Maghreb cuisine. The name comes from the Arabic verb chermel in reference to rubbing or marinating something with a spice mix. In Morocco, the best and most authentic chermoula is one made with fresh herbs and garlic. Although dry rubs bearing the name “chermoula” are sold in supermarkets, they are miles away from the real deal.

There are many recipes in Moroccan cuisine which use chermoula as a marinade, sauce or condiment; a classic Moroccan Fish Tagine with Vegetables and Fried Sardines Stuffed with Chermoula are two examples. However, there are other recipes which use chermoula but you may not be aware of it.  That’s because the chermoula ingredients are often not labeled as such and instead are listed alongside all other ingredients with no special instruction for premixing. Once you realize this and are able to recognize the core group of ingredients used in chermoula, as well as the characteristics of a dish which incorporates it, you’ll see the benefit of making a large batch ahead of time and using it when needed to lift your dishes.

Chermoula can come in different hues and tones, depending on its intended use and also depending on family preferences. We can categorize chermoula as follows:

Basic chermoula usually combines fresh herbs, several spices, and an acidic ingredient. In its extended version it will include preserved lemons as well. The herbs commonly used are fresh coriander (cilantro) and parsley. The ratio of cilantro to parsley varies anywhere from 4:1 to 4:3 depending on the families and the regions. Some may also go for coriander only while others will prefer parsley only. As for the spices, sweet paprika, cumin, garlic, and sometimes turmeric represent the ingredients of choice. Lemon juice or vinegar and olive oil are the main liquids in this blend.

How to Use Chermoula

Chermoula is used as a marinade, a seasoning rub but also as a sauce or condiment served on the side. With that in mind, you can use it to:

A single batch of chermoula can be used to flavor separate cooked salads with very different results. So, as example, you might have carrots, eggplant (aubergine), and zucchini (courgettes) in chermoula, all served as separate starters at the same meal. Potatoes, too, can get the chermoula treatment. Despite featuring the same mix of herbs and spices, they will taste quite different from each other. It’s true that the vegetables themselves taste different anyway, but adding the same mix of chermoula to each one of them does not necessarily give them the same taste in the end. Also, the time in which chermoula is added is crucial to the final taste the dish will have.

Adapt Chermoula to Your Taste

The best chermoula is made using a pestle and mortar after first chopping all ingredients to release their oils. However, for a large batch or if you don’t have the magic mortar, a blender or food processor will do. In that case, you might need to add some olive oil or tiny bit of water to help with blending.

Once blended, the only way to determine if the chermoula’s seasoning needs adjustment will be to use your tongue. Indeed, some like it lemony, some like it hot. Or, we may prefer it different ways with different dishes. For instance, we tend to like a lemony chermoula if it will be paired with fish, chicken or a specific set of vegetable salads.

You will also want to make adjustments to the thickness of chermoula. It can be blended into a thick, relatively dry paste which can be used in the same manner as a spice rub. If it’s to be used as a marinade, the chermoula can be thinned considerably with water or olive oil. An in between consistency would be suitable as a condiment or basting sauce.

Knowing how you like your chermoula will open the door to a massive list of Moroccan recipes which rely on this incredible marinade. Far from boring and definitely adaptable, chermoula will become your go-to-condiment and marinade for dishes which impress family and guests. 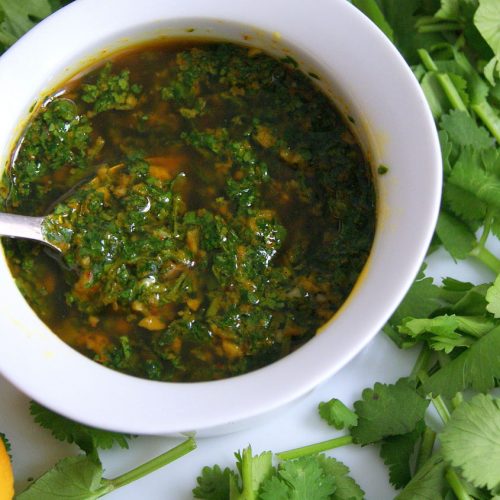 Nada Kiffa | Taste of Maroc
Chermoula is Moroccan blend of herbs and spices which can be used both as a marinade and as a condiment to season salads, stews, tagines and grilled foods. It can be brushed over meat, offal, chicken, fish, and vegetables or added as a flavor enhancer to fillings for stuffed fish, stuffed breads, and stuffed poultry, ground and roasted meat of all sorts.The yield and serving of this recipe is approximate considering the difference between manual and mechanical process of chopping or grinding. With these quantities and with a pasty but coarse and runny texture, I usually have the equivalent of a bonne maman jar nearly full.
4.7 from 10 votes
Print Recipe Pin Recipe Save Recipe Saved!
Prep Time 10 mins
Total Time 10 mins
Course Spices and Condiments
Cuisine Moroccan
Yield 1 cup
Calories 634 kcal
Prevent your screen from going dark

Optional ingredients depending on recipes

Using a Mortar and Pestle (Mehraz)

Hi Nada, It is really great recipe with lot of information about chermoula, compared to other sources. I have quick questions:

I know there are lot of question but I'm enthusiastic to cook it in many dishes that i cook myslef. thanks in advance

You have brilliantly highlighted how Chermoula can take different profiles based on the use it's intended for.

I would like to second what Christine answered below especially regarding saffron addition. When saffron is added, you are ideally looking for anything but a red-toned chermoulla (due to the heavy use of paprika).

If I take as an example the Cuisine of Fez, saffron is not mixed with other potent spices such as paprika or cumin so it stands out. But it goes well with citrus, garlic and coriander or parsley.

For grilled chicken or meat, you can use whichever version of chermoula but on a personal note, I like to marinate prior to cooking but also leave a bit on side to serve with the grilled meat (fish, chicken, red meat) especially during summer.

The grilled white meat as well as liver can take more lemon or vinegar in its vhermoula mix. Not so for the red meat (ideally without that addiction).

I hope this helps!

Hi Mohamed. Hopefully Nada will reply soon, but I'll offer my own responses.

For fish, I usually use the recipe as written with the addition of lemon juice (to taste). Sometimes I also add a spoonful of dijon mustard for baked fish; the mustard is not traditional but quite nice on baked fished. Or, for baked salmon, I'll do a green chermoula with just salt, pepper (no cumin or paprika) with a spoonful of dijon.

For chicken, I add turmeric and saffron with just a little lemon juice. Sometimes I replace the cumin with ginger. Be careful not to scorch the garlic if pan frying.

For lamb or beef, I prefer chermoula spicy, so extra black pepper or a little cayenne added. For lamb chops, I add lemon juice and saffron.

Your're correct about saffron; it can sometimes get lost among other seasoning but not always. You can always go easy on the paprika and cumin and let the saffron shine through a bit more.

Hope that helps a little.

Nada, I've been thinking of making chermoula for years after tasting a chermoula-marinated fish in Tangier. It seemed so daunting... You make it sound perfectly doable. I love the format of your recipes. Super helpful to see nutrition facts label. Thanks for this great website - I'm already a fan!

Hi Anna, I'm glad you like it. Chermoula is the easiest thing to do and it is versatile as you can adjust it to your liking in term of spiciness, heat and acidity but also use it in a variety of dishes and bakes.

Please do check regularly as there will be more recipes coming ahead, including ones featuring chermoula.