This recipe for Moroccan Fish Tagine with Chermoula and Vegetables is one of the most popular ways to prepare fresh fish in Morocco. First the fish is marinated in a zesty herb and spice mixture called chermoula, then it’s layered with potatoes, carrots, tomatoes and green peppers in a tagine for slow braising. Traditionally tagines are cooked over a fire or charcoal in a special brazier, but these days it’s more common to see home cooks using a stove instead.

I like to include sliced onions as a base for the other veggies — the onions caramelize on the bottom and are delicious all on their own — and I also garnish the tagine with a chili pepper or two which is enjoyed as a condiment. Instead of using onions as the base, you can arrange sticks of celery across the bottom of your tagine or use small skewers. This avoids the other ingredients scorching from direct contact with the bottom of the tagine.

As with other tagines, this one is intended to be served directly from the tagine, with each person eating from their own side of the dish using Moroccan bread in lieu of utensils. Offer it as a one-dish meal or serve it alongside salads or other fish dishes such as Sardines Stuffed with Chermoula. 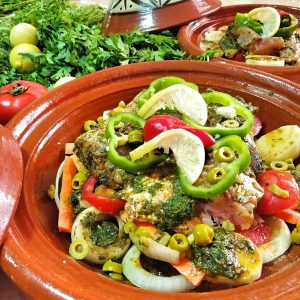 For Seasoning the Vegetables

Ahead of Time - Marinate the Fish

Christine, this fish tagine was my very first tagine. I'm so grateful to you for these recipes. My son is in Rabat, Morrocco and he sent me to the tagine and got me gorgeous spices. So I'm doing my utmost to fully incorporate them into my cooking. It is still cooking but I don't see how it can fail. Wish I could post a picture.

Hope the tagine came out great for you and that you cook many more delicious meals in it!

Made your fish tagine for dinner tonight, it was DELICIOUS! Thanks!

Glad you liked it. Bssaha!

I made this last night for company. I chose halibut for the fish. It was so delicious! Got rave reviews from all. Thank you.

So glad you and your guests liked it! Thanks for taking time to let me know.

Hi Christine, Two comments if I may, I add a a handful of garlic cloves, lightly crushed, to the vegetables and omit the onions. Second, I cook the vegetables for 45-60 minutes and then add the fish, marinated in chemoula and cook for another 15-20 minutes. The fish will not be as firm as the tradition calls but rather just flaky to the point. Your loyal reader, Amitai

Thanks for sharing your method, Amitai. I'll give it a try next time I make the fish tagine!