Moroccan eggplant (aubergine) in chermoula or Bdenjal Mchermel is an easy cooked salad or side dish which can be made ahead of time and served later. It’s traditionally presented on small plates which are arranged around a main dish which has been placed in the center of the table. It also works as a garnish when served over grilled fish or a stewed piece of lamb, providing extraordinary contrast.

Since eggplant is a bland vegetable, you should be generous with the chermoula and allow ample time for marinating. The eggplant will benefit from long exposure to spices and herbs and will absorb all of their goodness.

Methods of Cooking and Serving Eggplant with Chermoula

This salad is easy to prepare. Since I rarely run out of chermoula and I usually have oven-roasted eggplants ready for all sorts of recipes during the week, I am able to make it in an instant. 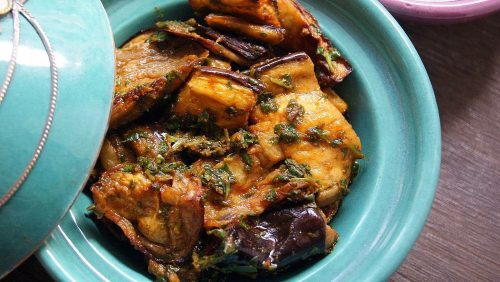 It is tradition to serve the marinated eggplant whole or cut into thick slices or wedges, but I can assure you that dicing it or just cutting in large pieces is equally good. And, while chermoula made with fresh herbs is key to this salad, the choice of cooking method is fundamental to the final flavor.

When the eggplant is to be served whole, a few lengthwise slits are first cut all around and then the eggplant is either boiled in salted water or rubbed with salt and steamed. This method requires draining the cooked eggplant for a few hours followed by pat drying to ensure that it won’t render a lot of water in the marinating stage. The slits will have to be generously filled with chermoula.

Initially people used to fry slices of aubergine, pat them dry, then mix them with chermoula. However, many years ago my family replaced frying with baking. This method of cooking is much healthier and it intensifies flavors. The baking time varies according to the thickness of the pieces but most importantly, you should look for a nice golden brown color.

Each family has a preference. At this stage of my life, I do tend to go for the oven-roasted option as described in my recipe below. 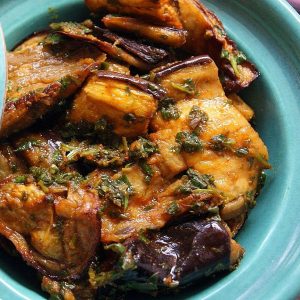 Nada Kiffa | Taste of Maroc
Moroccan Eggplant Salad with Chermoula is actually a versatile recipe. It's normally served alongside other salads at lunch time but it can also be served as a side dish or used to garnish grilled or stewed meat. At times I have unconventionally turned it into a dip and served it as canapes, but the traditional version will most likely feature heavily marinated eggplant, which is either served whole or cut into large cubes or slices.Allow plenty of time for marinating, then serve cold or at room temperature to appreciate it better.
4.17 from 6 votes
Print Recipe Pin Recipe Save Recipe Saved!
Prep Time 10 mins
Cook Time 25 mins
Marinating 1 d
Total Time 1 d 35 mins
Course Salad, Side Dish
Cuisine Moroccan
Yield 6 servings
Calories 206 kcal
Prevent your screen from going dark

Thanks for including this recipe. I've been trying different versions of my own since I ate it in Larache at one of the great sea food restaurants in the harbor. I love this eggplant even more than Zailouk.

Thanks Jan, I hope you try it soon!