Khlii is a confit of dried Moroccan meat that’s stored in its cooking fats. Once an important way to preserve meat in the days before refrigeration, khlii is now enjoyed as a delicacy. 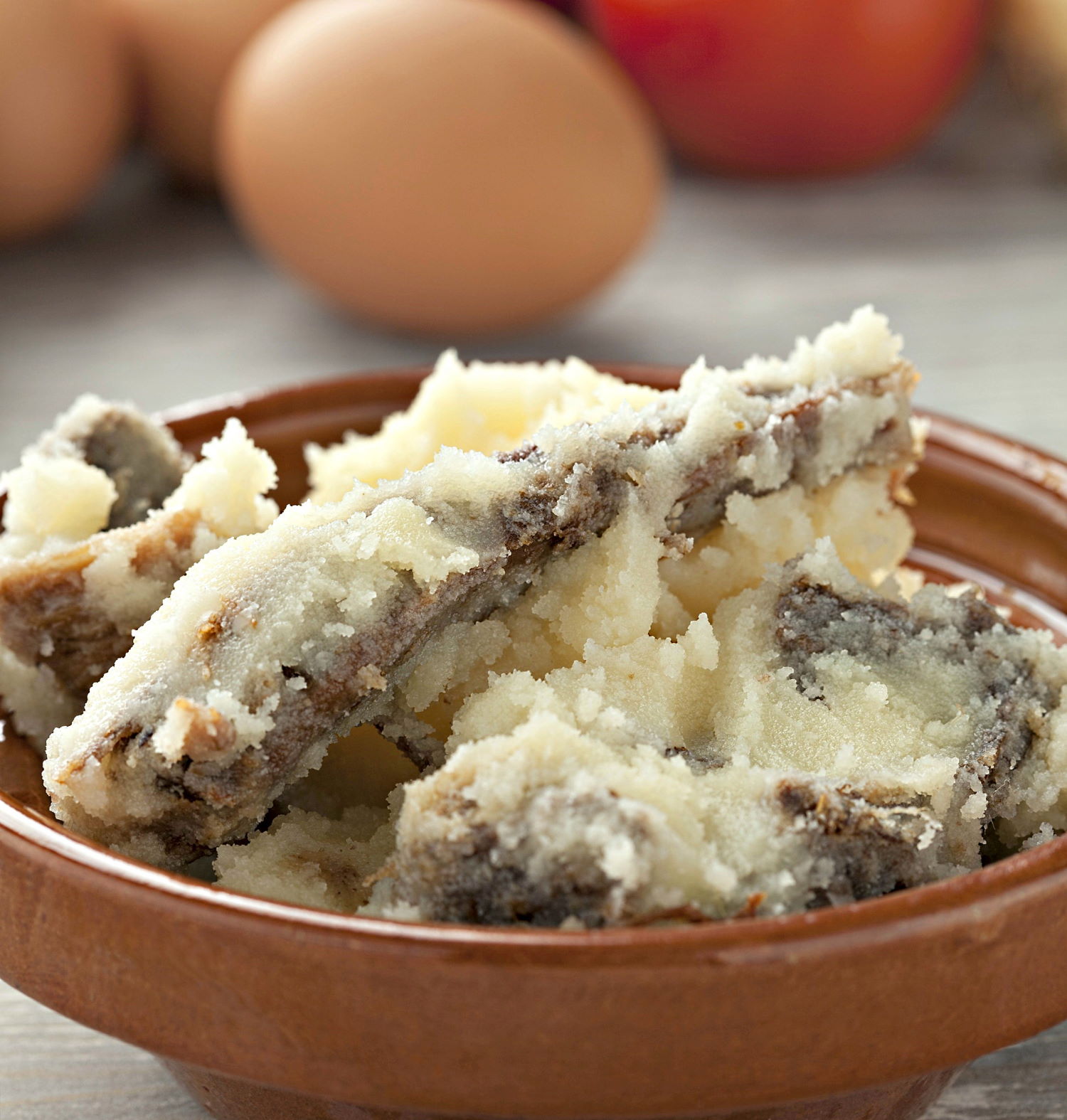 Khlii is a type of Moroccan preserved meat which is cooked confit-style. Photo: picturepartners | Bigstockphoto.com 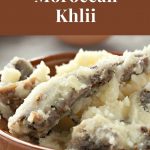 Khlii (or khlea) is a confit of Moroccan preserved meat. It’s traditionally prepared by the long, slow simmering of a cured, dried meat called gueddid in olive oil and suet. The resulting confit will store safely for months on end, if not for a year or two, at room temperature.

The tradition of making khlii seems to have started in Fes before spreading across Morocco and North Africa. This is probably the reason why Fes is still referred to as “the Capital of Khlii” in Morocco. It’s hard to imagine a Fassi (from Fes) house without this delicacy or at least its sediments, called agriss, agriche or agreish.

Both khlii and agriss find their way into many dishes over the course of a year, from breakfast to dinner. You will find it in morning fried eggs or in laminated flatbread, or perhaps in cooked starters and salads. Maybe it will be an ingredient in the main dish of the day but it could also be in tonight’s soup.

Marrakesh is the second Moroccan city which counts khlii among its culinary traditions. While khlii used to be a frugal element in the Moroccan diet, especially in those cities, in modern times it has become a sort of delicacy which is appreciated throughout the kingdom, with domestic tourism helping to elevate khlii’s status.

How Khlii is Used

Khlii is mostly treated as an ingredient in Moroccan dishes. It can replace meat as a main component in a recipe or work as a sort of condiment which lifts the flavor of a soup or sauce.

Because it was simmered confit-style, there’s no need to soak or otherwise re-hydrate khlii. It can be left in fairly large pieces when used in stews or other dishes that have ample liquids and long cooking times, but for quick dishes it may be preferable to cut it into small bits and pieces.

The best example of a quick dish with khlii is also one of the most straightforward Moroccan recipes you’ll encounter—pan-fried khlii with eggs.  It’s usually served with Moroccan mint tea and eaten by hand with Moroccan bread (khobz), which is used in place of a utensil. While most Moroccan restaurants and coffee shops will offer this dish as Fassi breakfast fare, it can in fact be served as a quick meal any time of the day.

Khlii’s main component is gueddid, strips of cured meat which are sun-dried. The meat of choice is usually beef or camel, but gueddid is also made with lamb or mutton, particularly after Eid al Adha. Traditionally, gueddid is prepared once or twice a year, leading to two types of khlii.

Winter khlii (khlii el wardi or ouardi)  is prepared with gueddid made during winter months. Given the cooler weather, the gueddid requires a long time to dry. However, expert khlii makers say it tastes much better as the meat has longer to cure.

Summer khlii is made from gueddid that was dried in summer heat. The exposure to sun is of shorter duration yet more intense, causing the meat to dry within days to the point that its edges look dark and nearly calcined. This version needs more oil and water to re-hydrate the gueddid as the meat will have lost up to 50 percent of its water content. However, those liquids will then have to be reduced. 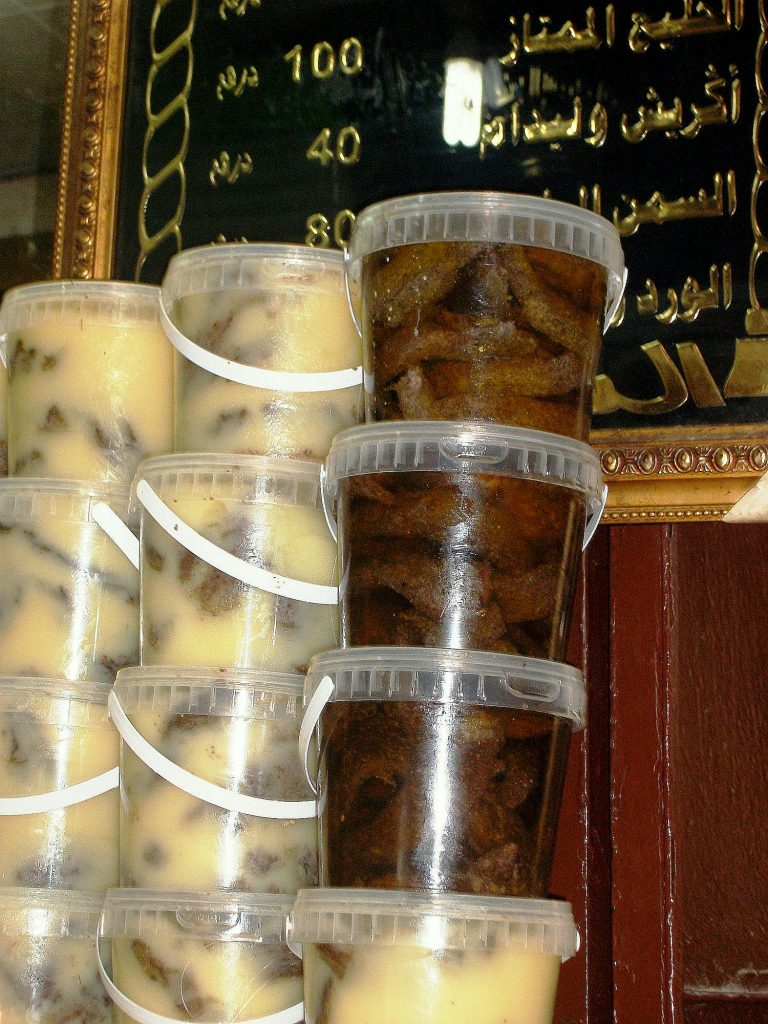 Khlii for sale in the old R’cif in Fez. The khlii on the left is packed in a mix of fat and oil while the khlii on the right in olive oil only. Photo: Nada Kiffa | Taste of Maroc

While the tradition of making khlii at home is still alive, it does require a bit of expertise so we don’t find nearly as many families making it as before. Most now prefer to buy it ready-made from market vendors or grocery stores.

Given that commercial availability, it seems that many families will eventually lose the skill and knowledge required to make a good khlii.

There are several ways to go about making khlii, depending on the degree of authenticity you’re after, as well as how much time you have to give to the process.

The traditional method involves simmering the dried meat (gueddid) for many hours in a mix of fat and water, taking care to follow meticulous steps which will yield three separate layers—the meat, the fat, and the sediment (agriss). Each layer is used in recipes throughout the year to come. It’s a lengthy process but worth the effort if you’re after classic and authentic khlii.

In recent years, health-conscious Moroccans developed an alternative to cooking the dried meat in fat—they steam it instead. While this yields a healthier khlii, the steamed meat lacks flavor and it will still need to be fully covered in olive oil to preserve it.

Another downside is that this method does not render agriss sediments. On their own, the sediments can be used as a condiment in many dishes to lift flavor or bring richness to the texture. I can skip khlii but I need my agrisse! Not to mention the layer of fat, which helps in getting the crispiest roast potatoes!

If you don’t want to go through the lengthy process of making classic khlii, you can opt to make express khlii (Mqila Slaouia) which uses fresh meat rather than dried.

While express khlii skips the time-consuming step of having to dry strips of meat ahead of time, the final result will not keep nearly as long as the traditional version. You can work around that issue by freezing express khlii.

However, there is no workaround for the fact that the express version is a compromise of the real thing. The difference between express khlii and classic khlii might be compared to the difference between fresh goat cheese and an aged one. For that reason, if you have the opportunity to make the traditional version, I suggest you go for it.

This is a relatively new variety of khlii in Morocco. If you are not fan of red meat, you can cure turkey strips, which will take less time to dry and subsequently less time to cook into khlii.

Both gueddid and khlii are acquired tastes and not to everyone’s liking. However, I know many people who have adopted khlii and forgotten about bacon; my husband is one of them.

Therefore I was surprised by a well-known food program which showcased khlii as a “meat gone bad.” Other critics of khlii have been known to describe it as “rancid” or “fermented” or “spoiled” but these are usually inaccurate descriptors.

It’s true that both the flavor and smell of khlii can be pungent, but unless you’ve acquired it from a questionable source, it’s unlikely to be spoiled. 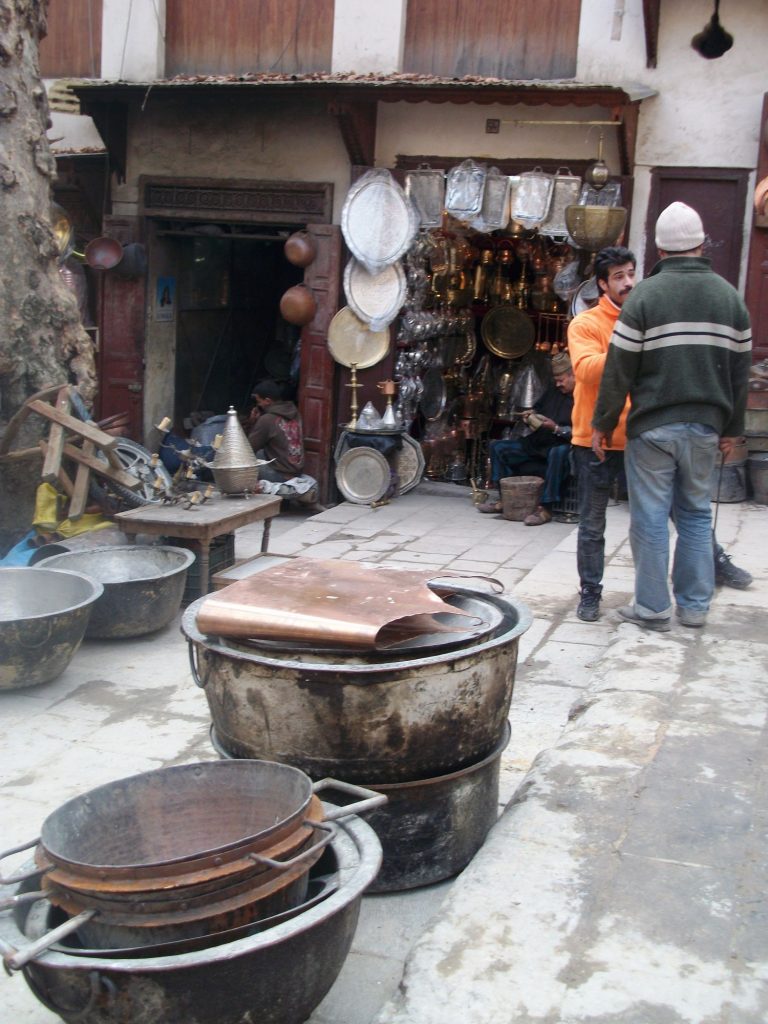 Gueddid that is not well-dried will lead to a bad khlii. An old or unwashed piece of fat might ruin it, as might a storage container that wasn’t clean or dry before khlii was added.

In those cases, khlii might indeed develop a disturbingly rancid taste and a tiny layer of mold might surface. To avoid both, khlii can be frozen rather than stored at room temperature.

Every house used to make a supply of khlii if they could afford to buy the meat. But times have changed, and I see many people settling for store-bought pots of khlii from the old medina.

Khlii bought from the market usually costs more than homemade and the quality is not always there. Some suppliers strive to offer a good product while others don’t.

Although khlii is traditionally made in huge batches of more than 20 kilograms of meat, making a smaller batch will increase your chances of success and you won’t have to buy a massive cooking pot.

Homemade khlii is better than store bought in many ways. Basically, if you are buying it from a shop, you will most likely be paying for more fat than meat itself. Making it at home allows you to control the quality, adjust it to your liking and it costs much less. 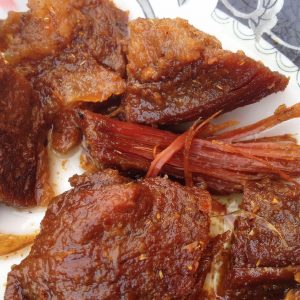 How to Make Moroccan Khlii (Khlea) - Recipe and Tutorial

Nada Kiffa | Taste of Maroc
A Moroccan dried meat called gueddid is the main ingredient in this family recipe for khlii, a confit of preserved meat. The methods for making both gueddid and khlii were essential to keeping meat edible in the days before refrigeration.If you don't have gueddid on hand, you'll need to take time to make some a week or two before getting started with the khlii. You'll also need to obtain suet (kidney fat). After cooking, the fat turns solid as the confit cools, providing the meat with a protective layer that keeps it safe at room temperature. The khlii was traditionally made in large batches and stored in clay urns for up to two years.At one time khlii was enjoyed in a sandwich with a hot glass of mint tea, but now it's regarded as an ingredient of choice to make dishes ranging from morning fried eggs to soups and starters, as well as main dishes and breads.
4 from 5 votes
Print Recipe Pin Recipe Save Recipe Saved!
Prep Time 30 mins
Cook Time 4 hrs
Total Time 4 hrs 30 mins
Course Preserved Meat, Spices and Condiments
Cuisine Moroccan
Yield 149 oz. khlii (approx.)
Calories 109 kcal

Checking the Readiness of Khlii

The Final Texture of the Fat Layer

Storing the Layers of Khlii