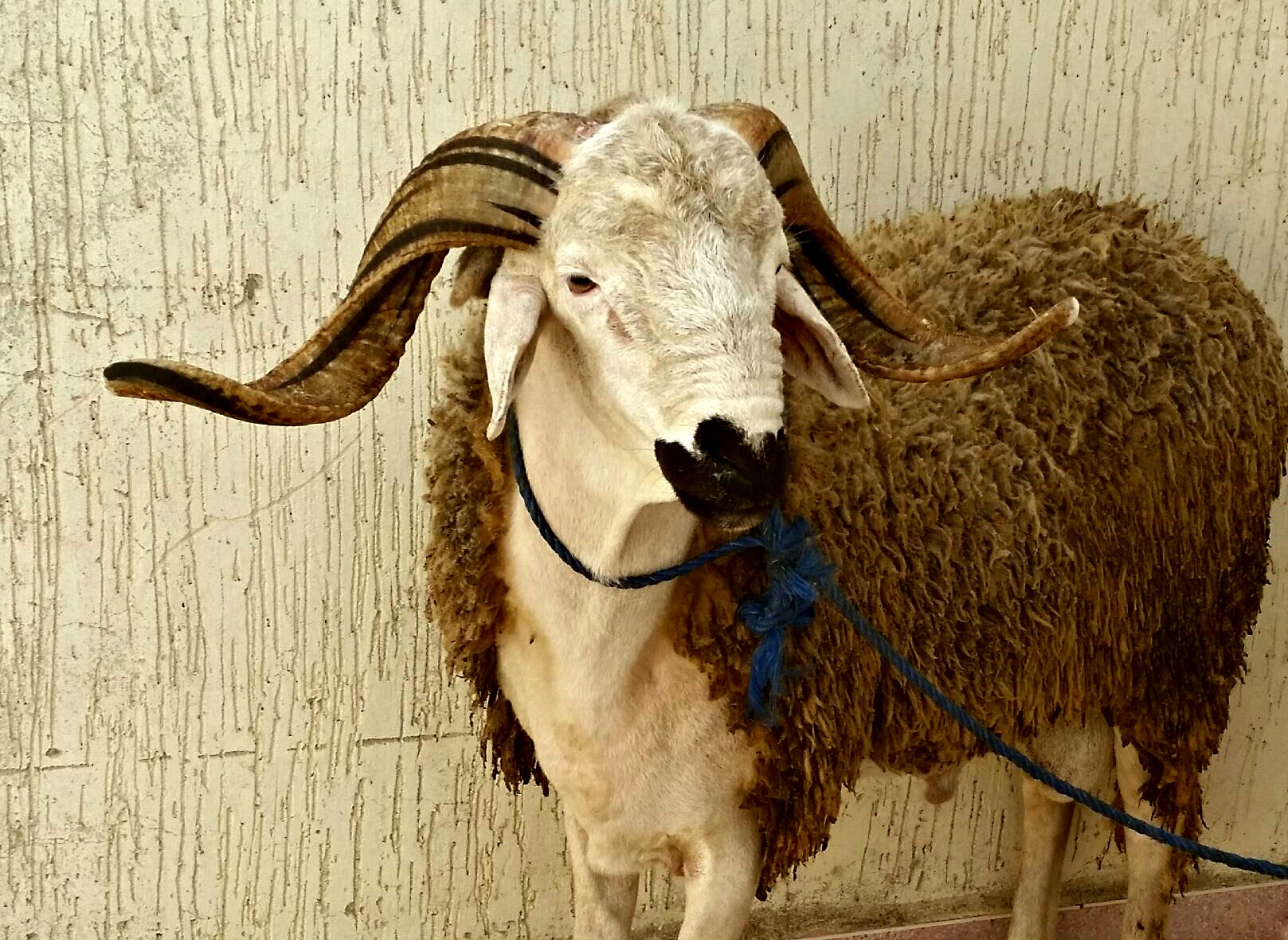 A ram photographed on the occasion of Eid al Adha in Morocco. Photo: Christine Benlafquih | Taste of Maroc

Of the two, Eida al Adha is regarded as holier and more significant; for that reason it’s also called Eid al Kabir, “the greater festival” or “the big festival.” The term Eid al Kabir is used quite widely in Morocco, where both general Islamic and unique cultural traditions are associated with the holiday.

The Arabic words Eid al Adha translate to “The Festival of Sacrifice.” It’s a three-day holiday which commemorates the occasion when Prophet Abraham had a vision that he was to sacrifice his only son.

Trusting that this dream was a divine command and test of faith, he set out to comply. It was only when Abraham was about to carry out the sacrifice that God commanded him to stop, indicating that his willingness to obey was fulfillment enough of the vision. A ram was slaughtered instead.

On Eid al Adha, Muslims demonstrate similar obedience to God by slaughtering an animal such as a sheep, goat, camel or cow according to strict Islamic guidelines; they then donate a portion of the sacrificial meat to charity. This sacrifice, referred to as an udhiyah, is required only of those able to afford it.

Many people—particularly those from the West who prefer to ignore where their meat comes from—are put-off by the idea of a religious or home slaughter, believing it to be a cruel and unnecessary waste of animal life.

However, scientific studies have shown that the Islamic method of slaughter (zabihah) is in fact humane and produces healthier meat than automated slaughterhouse methods used to supply most grocery stores. And, despite the large number of animals slaughtered worldwide on the occasion of eid, none of the meat goes to waste, with the poor being the largest group to benefit.

Additionally, many Muslim cultures have unique food traditions surrounding the offal and variety meats that typically get discarded in the West. The animal hides, too, are collected and purposed appropriately.

Many Moroccan Muslims follow Islamic tradition by attending an early morning congregational eid prayer and khutbah (sermon) prior to performing the slaughter. Many families choose to slaughter immediately afterward, although any time that day or in the two days following is acceptable.

Some Moroccans prefer to wait for the king of Morocco to slaughter first, out of respect for his official position as the Amir al Mu’minin (leader of the faithful). This, and the eid prayer which the king attends, is usually televised.

The slaughter itself is a significant part of Eid al Adha, but it’s not the only aspect of the Muslim holiday. Other Moroccan traditions observed during Eid al Adha include the distribution of meat to the poor, buying new clothes or gifts for children, paying visits to family and friends, preparing holiday sweets in advance and cooking Moroccan dishes culturally associated with the holiday.

In the week or two leading up to eid, it’s common to see sheep hauled home via motorcycle or cart, or perhaps in the open trunk of a car. Temporary shelters, sometimes referred to as “sheep hotels,” will be set up in parking lots, city garages, or on empty lots for the sale and care of sheep until the day of eid.

Feed and straw, for those who prefer to care for their sheep at home, and large bags of charcoal for grilling are readily available from curb-side vendors. Souks and grocery stores prominently display cooking and grilling equipment such as skewers, braziers, grill baskets, knives and more.

On the first day of eid following the prayer, many Moroccan neighborhoods are bustling with activity. Butcher stations may be set up on city street corners near apartment buildings to provide services to residents of congested areas while in quieter neighborhoods freelance butchers may walk the streets, offering their assistance with home slaughters.

Makeshift grills can be found on street corners or empty lots to accommodate the charring of fur from heads and trotters; men or boys with hand-pushed carts make their rounds to collect unwanted animal hides. And, in the days following, poor people might go door to door to ask for handouts from the meat portioned out for charity.

Food traditions can vary widely in Morocco, both among regions and among families. However, some are so common as to be familiar to nearly all Moroccans. Those Moroccan food-related traditions of Eid al Adha include:

Another Moroccan food tradition associated with Eid al Adha in Morocco is to hold a family or neighborhood khaylouta. The term, which translates literally to “a mix,” is the name given to the gathering of young children for the purpose of making or “mixing”  individual tagines—or alternatively a single large one—using meat from the sacrificial sheep.

Khaylouta tagines are ideally cooked outdoors over hot coals in braziers and the children then share the finished dishes among themselves.

This event, deeply rooted in Berber tradition, occurs several days after Eid al Adha and is mostly found in southern Morocco as an event to entertain children. The name boujloud translates to “the father of skins” or “the one who wears sheepskin” and it refers to the silly, sometimes scary and sometimes elaborate costumes worn mostly by young men during the spectacle.