Mrouzia is a sweet and savory Moroccan tagine that’s seasoned with ras el hanout, ginger, saffron, and cinnamon. Honey not only adds sweetness, but in earlier times also acted as a preservative in tandem with the spices. 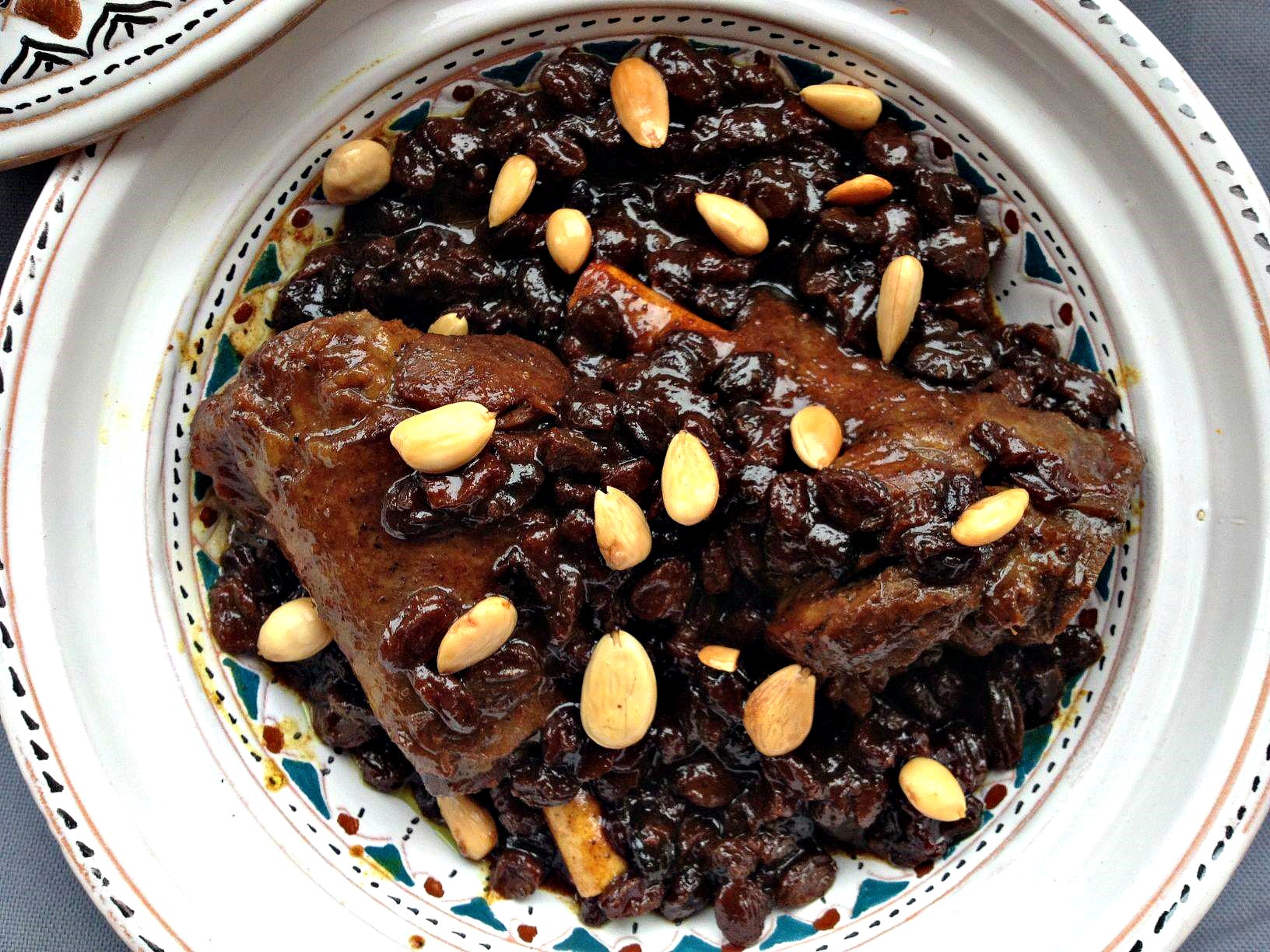 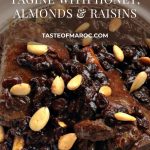 Mrouzia is an old and traditional Moroccan tagine of meat, raisins, almonds and honey.

Heavily spiced and sticky sweet, it’s a favorite dish to prepare during Eid al Adha when extra meat is on hand from a home slaughter. Lamb is usually preferred but beef or goat meat may be used instead.

The intense seasoning with Ras el Hanout and ginger, along with honey and added fat, all work together to make mrouzia a dish that could be safely stored for a long time at room temperature.

In the days before refrigeration, this was a wonderful alternative to other methods of preserving meat such as by drying and cooking in fat, as is the case with gueddid and khlii.

However, mrouzia was not always the meat-laden dish that it is today. In the tradition of Fassi people who do not like to squander, mrouzia was once a dish made from whatever was left over after choicer pieces of meat had been used for other dishes.

Bones with a bit of meat stuck on them would be marinated and kept for hours until ready to be cooked. Many families continue to make mrouzia in this manner. They may throw in additional meat, but it’s still primarily a way to make use of bones left after most of the meat had been cut away.

In the old days, mrouzia was kept in massive clay jars for at least two months. The reason it lasted that long is because the dish was cooked confit-style (which is how it should be, no runny sauce!) over medium heat until all water had evaporated and only oil was left.

It was also a fatty version as the fat surrounding the kidney had to be added to the pot as well. As with any meat confit, the fat served as a seal once it had cooled.

How did our ancestors know when mrouzia was perfectly cooked? They used to dip in a bit of fabric or braided cotton then light it to see if it could hold a flame. If it did, they knew that all the water had evaporated and the meat would be safe to store at room temp.

Now that we have fridges and freezers, we can enjoy a much lighter mrouzia with proper cuts of meat. As for the almonds, not long ago they would have cooked in the sauce along with the raisins, but now we prefer to fry them for a crunchy texture and add them as a garnish.

The tradition of mrouzia spread until nearly every region in Morocco now makes it, but there are some variations:

No matter the variations, one thing most Moroccans will agree on is that a good blend of ras el hanout from a trusted spice vendor and the right version of black raisins (seedless or not) are essential to an excellent mrouzia.

The addition of onions is common in modern times but optional; before the days of refrigeration, they weren’t used as they would spoil the meat.

Mrouzia has witnessed centuries of changes. It made its way to Morocco from Egypt via Andalusia; the earliest documented recipe appears to be one found in the 13th century Anonymous Andalusian Cookbook.

Originally it was a form of sikbaj known as escabeche, which was a method of cooking with vinegar. As such, it was a sweet and sour dish that featured dried raisins and vinegar along with chicken.

Throughout the centuries, black cherries would be added as well as almonds at a later stage of the cooking. This particular combination, along with other fruits, was mentioned in an old Egyptian book.

In the 14th century, cookbook author Ibn Razin mentioned mrouzia under El Mu’assal (we now call it M’aassal), which is in reference to the sweetness from honey.

Mrouzia’s profile changed with the dropping of vinegar and the addition of spices. Other sweet dried fruits found their way to it such as dates, figs, and prunes along with honey (or more recently sugar).

Despite the absence of vinegar, sweet and sour should be the guideline when choosing the type and variety of dried fruits to be used in the dish.

So, although the flavor profile of mrouzia is undoubtedly sweet, the dish will be properly balanced by selecting raisins that are slightly sour or at least not of the sweetest variety.

The Italian Ambrogino/Ambrosina falls into this line of dishes too. Isn’t the world one small plate?!

So, here is our family recipe for mrouzia with more meat and less oil and sugar, yet still packed with incredible flavors. This dish keeps well in the refrigerator for up to two weeks and in the freezer for several months. 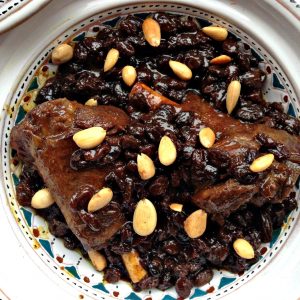 Nada Kiffa | Taste of Maroc
Prepared on the occasion of Eid Al Kebir (Eid Al Adha), M'rouzia (alternate spellings: l'Mrouzia, Mrouzia or El Mourouzia) is one of the Moroccan main dishes cooked especially and solely during this festive period. It's a sweet, warm dish defined by its seasoning with Ras el Hanout. Everything in Mrouzia is about time—time to macerate the meat in the spice rub followed by time to slow cook it to a confit on low heat. It's what makes of Mrouzia such a wonderful dish to share with our loved ones and an exotic dining experience to share with others.
5 from 3 votes
Print Recipe Pin Recipe Save Recipe Saved!
Prep Time 10 mins
Cook Time 2 hrs 50 mins
Marinating 6 hrs
Total Time 9 hrs
Course Main Course
Cuisine Moroccan
Yield 8 servings
Calories 486 kcal
Prevent your screen from going dark

For Cooking the Meat

For Cooking the Raisins

Fry or Roast the Almonds

I like it too but honestly in moderation. That sticky confit of meat has something special about it especially when marinated with proper ras el hanout. Always looking forward to Eid Al Adha to enjoy it.