Thousands of years ago, people developed ways to preserve and store food for as long as possible. In the Maghreb where Morocco is located, sun drying cured meat was one such way. Moroccan families inherited this ancestral method and continue to use it in modern times— particularly during Eid al Adha—to make gueddid (or qaddid) as well as tichtar, a nomadic version of dried camel meat. Many Moroccans also cure and preserve marinated intestines, bones and stuffed stomach.

During sun-drying, the massive reduction of moisture in the meat via exposure to hot and dry air, and a combination of salt and vinegar in the curing marinade, help limit if not stop microbial growth while also protecting against insects. Gueddid and other meats preserved this way can be stored for months in the cupboard at room temperature.

We’re lucky that Eid al Adha has been falling in warmer months for the last six years or so. Not only does hot weather help ensure that gueddid is of good quality and well dried, but it also speeds up the drying process. I once witnessed gueddid made in just four days from start to finish due to a mid-summer average temperature of 104° F (40° C), which is common in cities such as Fez and Marrakesh. It was so hot that the meat was fully dehydrated after three days of sun exposure. Under normal conditions it takes around a week.

For this reason we generally try to make gueddid during hot weather in preparation for winter. However, since Morocco is blessed with sunshine most of the year, we can make dried meat year round if an occasion calls for it. In cooler weather we must hang the meat outside for a longer period of time, and we watch the weather forecast closely in expectation of rain. I can remember sitting in the living room with my family and suddenly my mother shouting, “Drops of rain!” or “Le’ghmam!” in reference to heavy clouds. We immediately jumped into action to save the gueddid from picking up moisture. We ran outdoors, collected the strips of meat from the clotheslines, and were back inside in a split second.

Gueddid is, in a sense, the Moroccan equivalent of jerky, but it is thicker, drier and not intended for snacking. The terms gueddid and qaddid come from the Arabic verb qaddada. In our context, it refers to long strips of meat which have undergone a long marination and drying processes. To make gueddid, strips of calf or lamb meat (or sometimes camel, and recently turkey, too) are left to marinate in a spice mixture for at least 48 hours. After marinating, the meat strips are hung outdoors until direct exposure to the hot sun dries them out, thus preserving them for months to come.

Gueddid is easy to make as both the cuts of meat and spices used are not difficult to find. Once in hand, it’s a simple three-step process: 1) kaddada, which is to slice the meat into long strips); 2) charmala (from chermoula), which is to rub the meat with a marinade; and 3) to dry the meat. Easy enough, but outside of Morocco you may encounter the issue of how to dry the meat, especially if you live in a London flat or somewhere else where sun is limited or you lack outdoor space. In such scenarios, an electric food dehydrator will come in handy, or, if you don’t want to invest in one, you can use a home oven. For the latter, make sure the oven thermostat can be set as low as 160° F (70° C) to 176° F (80° C), as a higher temperature is undesirable.

As the meat fully dries, it becomes hard to the touch with a much darker color. That’s when we can finally give it the name “gueddid.”  If you are familiar with South African biltong, then you will have a sense of gueddid’s appearance. But while biltong is used for both snacking and cooking, gueddid is only used in recipes which call for a long cooking time. This includes khlii, a confit of preserved meat which is made by simmering gueddid in fat and olive oil.

What to Do with Gueddid

Think of gueddid as regular meat, only with concentrated flavor, just like anything else that’s dried in the sun or in the oven. As such, it works as a substitute when fresh meat is scarce, especially for those who live far from sources of meat or for those who can’t afford it regularly throughout the year. Many Moroccans, however, simply make and enjoy gueddid as a matter of tradition.

Gueddid is an acquired taste; you either like it or you hate it. I personally don’t like its texture but I do like the flavor it imparts to a stew. It acts as a sort of soy sauce or a cube of bouillon as it really gives a dish some depth and lifts it up. This unique depth of flavor can only come from gueddid; nothing can replicate it.

Gueddid is used in many recipes ranging from couscous to stews to soups. Most of the dishes with gueddid are meant to be winter dishes and the majority are regarded as comfort food. With the exception of khlii, most of the recipes calling for gueddid will instruct you to re-hydrate the meat for hours before adding it to the pot for cooking. 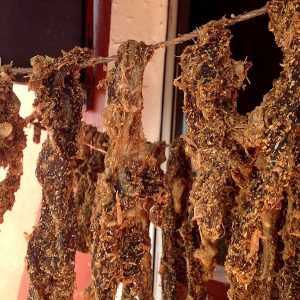 Nada Kiffa | Taste of Maroc
Gueddid or qaddid is Moroccan dried meat made by marinating strips of beef or lamb (although camel and turkey may also be used) and then hanging the meat to in the sun. As the meat dries, it loses anywhere from one-third to half of its weight in water and becomes hard to the touch with a much darker color. If sun drying is not an option, a food dehydrator or home oven may be used instead. As ovens and thickness of strips might vary from one house to another, the drying times below should be taken only as a guideline. You will have to be the judge of how dry the strips are.
Although gueddid is sometimes referred to as Moroccan jerky, it's never eaten as snack food and usually must be re-hydrated before long cooking in traditional recipes. It is not re-hydrated, however, when used to make khlii, a confit of preserved meat cooked in fat and olive oil.
Allow two days for marinating the meat before drying.
4.8 from 5 votes
Print Recipe Pin Recipe Save Recipe Saved!
Prep Time 30 mins
Marinate & Dry 8 d
Total Time 30 mins
Course Main Course, Preserved Meat
Cuisine Moroccan
Yield 48 2 oz. servings ([adjustable]6[/adjustable] lbs. total gueddid, approx.)
Calories 143 kcal
Prevent your screen from going dark

Drying the meat with sun

Oven method to dry the meat

How to know that the meat has properly dried?

Same methods is used in Northern area (Gilgit Baltistan), Pakistan. We called gueddid as ShokooMoos, as GB is cold area people store dry meet for winter, yess nothing could replace its taste.