These square, laminated Moroccan pancakes are called msemen or sometimes rghaif. They’re a popular breakfast and tea time treat not only in Morocco, but also Tunisia and Algeria. If you haven’t tried one, it’s time you do!

Although easily bought at bakeries or as a street food, many Moroccans prefer to make msemen at home. That way the texture, flavor, size and quality can all be controlled.

Serve them plain—I like them this way hot off the griddle—or spread with butter, honey, jam or cheese. The most traditional way, however, is to dip msemen in hot syrup made from butter and honey. A bit messy to eat, but sticky sweet and delicious.

The elastic bread-like dough used to make msemen can be unleavened or barely leavened. For the latter, just a tiny bit of yeast is used. In recent years, I’ve seen some cooks replace the yeast with baking powder.

I prefer the barely leavened method, which is what my recipe below uses. It yields msemen with well-defined layers, a slightly crispy exterior and chewy interior. There is room to play in terms of changing ratios of flour or replacing some or all of the white flour with whole wheat, but if you’ve never made msemen before, I encourage you to try the recipe as is.

Don’t be alarmed by the quantity of oil and butter used in the process of shaping the msemen.  All that oil won’t be absorbed into the dough. Done properly, msemen shouldn’t feel greasy or be any more indulgent than other rich treats such as croissants or donuts.

You’ll need ample work space to shape the dough into squares. A well-cleaned, clutter-free granite counter top, a large flat plastic or metal tray, or a large Moroccan gsaa will all do. Once, cooked, the msemen store beautifully in the freezer and are easy to reheat on short notice, so plan to make them ahead of time.

Once you master msemen, be sure to try making meloui, another type of Moroccan laminated crepe or pancake. 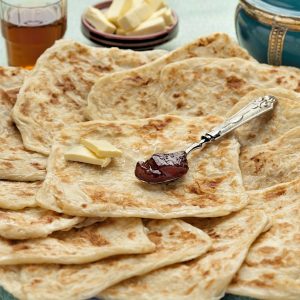 Christine Benlafquih | Taste of Maroc
Msemen are a flat, square-shaped Moroccan pancakes usually served for breakfast or tea time. They're made by flattening rghaif dough on an oiled surface until paper thin, dotting it with butter and semolina, then folding it into thirds (twice) to shape a layered pancake. You can make the msemen ahead of time and keep in the freezer until needed. Measures for butter and oil are approximate quantities. Be prepared to use more or less for folding the msemen.
4.77 from 21 votes
Print Recipe Pin Recipe Save Recipe Saved!
Prep Time 40 mins
Cook Time 15 mins
Resting Time 15 mins
Total Time 1 hr 10 mins
Course Bread, Breakfast, Tea Time
Cuisine Moroccan
Yield 20 4" msemen (approx.)
Calories 158 kcal

For Folding the Msemen

Hello can these be made with almond flour and do you have a video showing how you made them? Thank you!

I agree that a video would be helpful; I'll be making msemen soon and will try to remember to record a video. And, I don't think almond flour would work well for msemen unless you're just looking to use it as a substitute for the small quantity of semolina or durum flour. If your objective is to make gluten-free msemen, I recommend trying a gluten-free flour mix that's intended for breadmaking. You might need to add a little xanthan gum and increase the resting period to get the desired stretch to the dough.

Hello, can you still make the msemmen without semolina, I don’t have it right now. Will it also have the same consistency?

After visiting Morocco for the first time back in 2019, I promised myself that I would learn how to make msemen like the msemen that I ate in the streets of Casablanca. I’ve tried a few recipes but this one is the yummiest and most authentic. Thank you!

Thanks for letting me know that the recipe gave you great results. If you like whole wheat, try replacing a little of the white flour with some. It adds delicious flavor.

can i freeze more???

Yes. They freeze very well and you can make an extra-large batch with this in mind. Be sure the msemen have completely cooled before you freeze them.

How do you make your msmen not Crumble

I've never had my msemen crumble. Can you explain in more detail?