Kebab Maghdour is a traditional Moroccan dish in which brochette meat is cooked tagine style. Fried or poached eggs are often added as garnish. It’s quick, easy and delicious, and a great recipe to try if you’re new to Moroccan cooking.

In Moroccan cuisine, kebab refers to skewers of cubed meat (usually lamb or beef), poultry or fish. It’s the cousin of shish kebab but far from Doner kebab, also known as shawarma.

Now that we know what kebab means, let’s move on to the second word.

Maghdour in Arabic means “betrayed.” Now, there are two stories to explain the reason this word is used. One of them is because we can make the dish using bones left after boning meat intended for real kebab. The bones would have been stripped from most of their meat, leaving only the illusion of taste while the meat is hardly there.

However, the second and more famous story behind the name is that meat, instead of being grilled and served on skewers, is betrayed and ends up in a tagine or pot, where it’s cooked with a sauce. This way, the kebab meat can feed more people than grilled skewers would have.

Many of us grew up seeing our mothers make kebab maghdour frequently. When unexpected guests came, this dish was more than likely to be served. There are a few ways to go about making it.

The meat for this dish can be:

And, as already mentioned, there is a variation of kebab maghdour with bones (you could use ribs) but it’s not as common as the one with cubed meat.

You can use tender cuts of meat or stewing meat; the only difference is the time it takes to cook until tender (but never medium or rare). Usually lamb or beef is used. You can also use chicken or turkey, although these two are fairly new.

The sauce in kebab maghdour can be made with vegetable and/or olive oil. There’s also a variation with butter called kebab messahhed. The latter requires less onion and is perfect for leftover kebabs which have already been grilled.

As a general rule, kebab maghdour is a meat-only dish. However, cookbook writer H. Dinia mentioned that in Rbati (Rabat) cooking, there are many recipes that fall under this umbrella and many of them have seasonal vegetables added during the cooking. Unfortunately her book on Rbati cuisine is no longer in print.

My Tip for Char-Grilled Flavor

Some recipes call for kebab maghdour to be cooked twice—first the meat is grilled for smoky flavor before it’s added to the pot for the second part of the cooking. But if you can’t do that and still want char-grilled flavor, I suggest you use a bit of smoked paprika or liquid smoke in the seasoning for the meat. 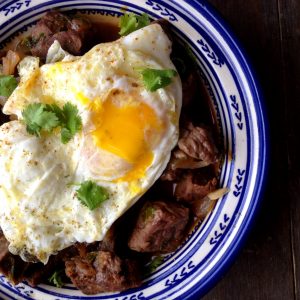 Nada Kiffa | Taste of Maroc
Kebab maghdour - "betrayed kebab" -  is one of the easiest Moroccan tagines to make. It's the perfect "last minute" recipe for unexpected guests and it's one of the first recipes we learn as junior cooks. The meat is cooked to buttery tenderness in a thick onion sauce, then topped with fried or poached eggs.The cooking time in the recipe is for premium cuts of meat that will cook fast. Adjust the timing for cuts that will take longer to reach tenderness. We can cook the meat up to 2 hours in some cases.
No ratings yet
Print Recipe Pin Recipe Save Recipe Saved!
Prep Time 10 mins
Cook Time 35 mins
Marinating 2 hrs
Total Time 2 hrs 45 mins
Course Main Course
Cuisine Moroccan
Yield 6 servings
Calories 519 kcal
Prevent your screen from going dark

thank you for very delicous recipe, it is best test,an i add a some tomato pest ,if thear tomato pest, meet is tender an colour is nice.