Mqila Slaouia (or just mqila) is a meat specialty dish from the Moroccan sister cities of Sale and Rabat. It’s commonly known as cheat version of khlii, a confit of preserved, sun-dried meat.

As with the traditional version of khlii, meat that’s been marinated with ground coriander seeds and a large quantity of whole garlic cloves is slow-cooked in a significant amount of fat.

However, mqila skips the lengthy step of drying the marinated meat before it hits the pot, making the process much faster. For that reason, it’s often called “express khlii.”

In Moroccan Arabic, the word mqila (also m’qila or mkila) refers to a frying pan but just like tagine, the container has transferred its name to the content.

However, mqila can be prepared in anything from a pot to a tagine to a Dutch oven as long as it has a heavy bottom and a cover. The end result will be melt-in-your-mouth pieces of meat that keep well for a couple of weeks if refrigerated and properly covered in fat or extra olive oil.

Mqila is often made in the days following Eid al Adha when extra meat is on hand. It’s always served hot and eaten warm, not cold or at room temperature.

I use it for anything calling for khlii when I can’t get hold of it. Or, since it’s more tender than traditional khlii, it can be used like pulled meat; for example in sliders or turnovers.

It can also be offered as a make-ahead main dish all on its own. In that case, you might prefer to use large pieces of meat on the bone as opposed to the strips of meat called for in the recipes below.

I must admit that Mqila Slaouia is not a diet-friendly recipe, particularly if serving as an entree. It’s one of those occasional dishes that could set your cholesterol levels flying high.

Normally a portion of the cooking fat is used along with the meat. However, you can reduce the calories, fat and cholesterol per serving by using meat only and reserving the fat for other recipes. I freeze the liquid fat in ice cube trays to use later for such things as roasting potatoes or basting a roast before it goes to the oven.

Although mqila is instantly associated with the cities of Rabat and Sale, a few other Moroccan cities have similar dishes with the addition of a spice or two; Hmiss from Taza is one example.

My own family recipe has been passed down from an old aunt who moved to Rabat in her late teens and married a Rbati man. We do include vinegar but it is not a general rule; for example, Christine’s recipe below doesn’t use it.

Sometimes we omit the addition of animal fat if we intend to serve mqila as a main dish. In that case, we do use cuts of meat with bones or large tender chunks of meat. This is all in keeping with the type of differences you’ll find among recipes for mqila. 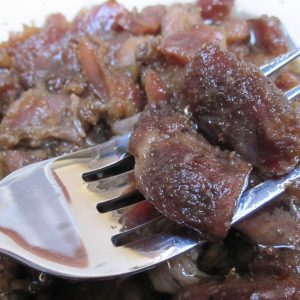 Christine Benlafquih | Taste of Maroc
Express khlii is known as Mqila Slaouia or Mqila Rbatia, named after the frying pan (mqila) in which it might be cooked as well as after the sister cities of Sale and Rabat, where the dish originated. It’s a faster method of preparing the Moroccan preserved meat known as khlii (or khlea). While the traditional method of making khlii involves marinating strips of fresh meat, drying them in the sun for up to a week, and then cooking them in fat and oil, express khlii avoids the drying process. For that reason, it will not keep nearly as long as traditional khlii. This particular recipe for Mqila Rbatia was shared by a friend’s mother-in-law, who lives in Rabat.
5 from 2 votes
Print Recipe Pin Recipe Save Recipe Saved!
Prep Time 15 mins
Cook Time 3 hrs
Marinating 12 hrs
Total Time 15 hrs 15 mins
Course Main Course, Preserved Meat, Spices and Condiments
Cuisine Moroccan
Yield 13 small servings
Calories 242 kcal
Prevent your screen from going dark

Tried this recipe? We’d love to know!Mention @tasteofmaroc or tag #tasteofmaroc!
Leave a Comment or Review 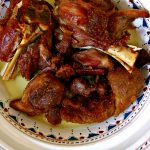 Mqila is a meat specialty dish from the sister cites of Sale and Rabat. It’s commonly known as a cheat version or express version of khlii, a confit of preserved meat.  I know many khlii-haters who love this dish, which in the end is just about basic ingredients and hardly any spice. The meat is irresistibly tender and pulls off so easily that you can consider it a substitute for any pulled meat and serve it on a lazy day. It may also be used in dishes which call for khlii as an ingredient.
Prep Time15 mins
Cook Time2 hrs
Marinating12 hrs
Total Time14 hrs 15 mins
Course: Main Course
Cuisine: Moroccan
Yield: 6 servings as a main dish
Calories: 772kcal
Author: Nada Kiffa | Taste of Maroc

For the Spice Rub