How to Make Moroccan Preserved Lemons

Making homemade preserved lemons is easy! The traditional method shown here requires only two ingredients and takes just a few minutes of your time. Leave the lemons to cure a month or longer before using. 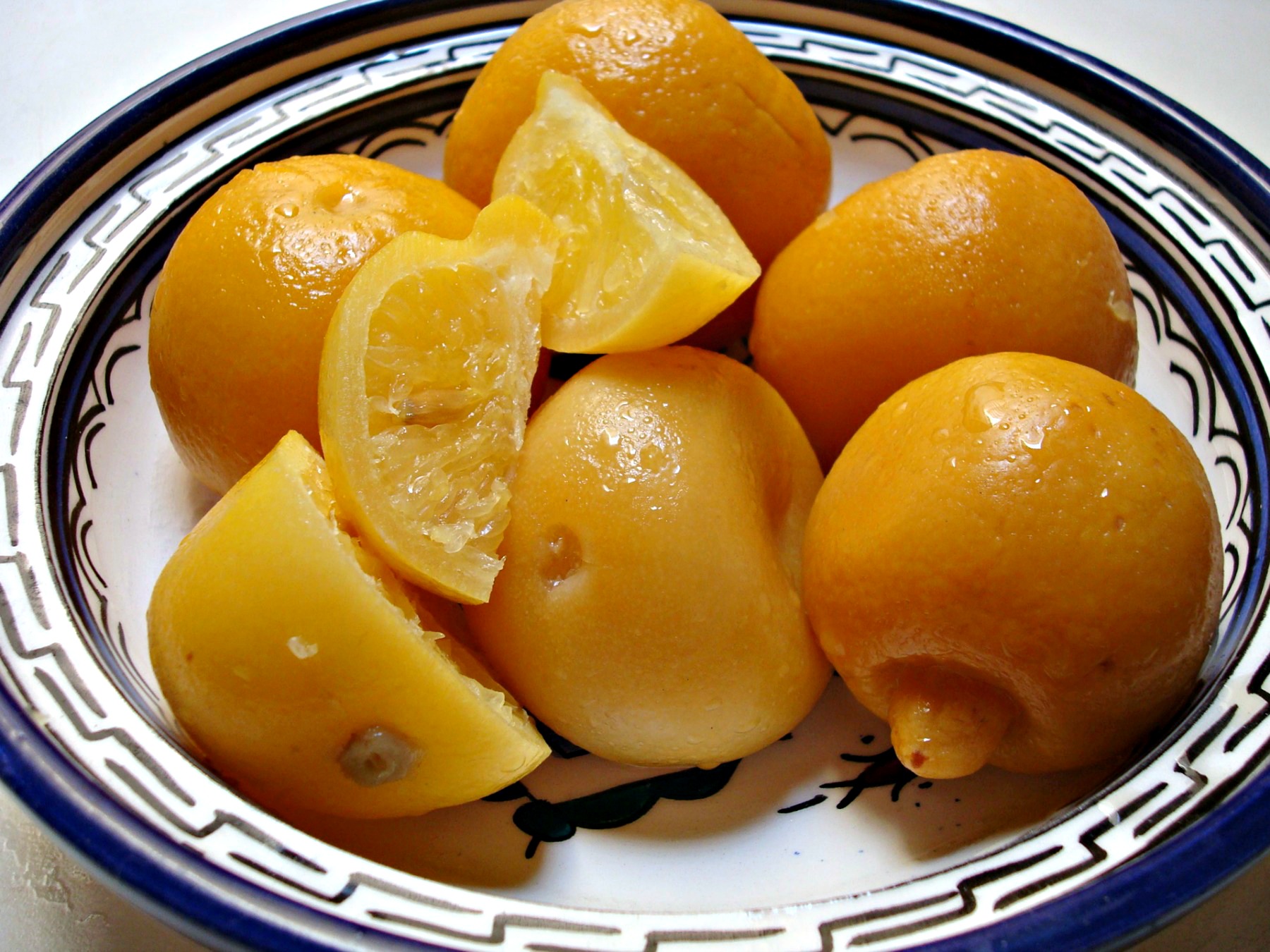 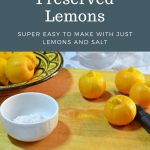 If you’re going to be cooking Moroccan dishes with any regularity, even if only occasionally, you’ll want to keep preserved lemons on hand.

The good news is that they’re surprisingly easy and inexpensive to make at home, requiring only two ingredients—fresh lemons and coarse salt—and just a few minutes of active prep time.

The photos and instructions below show just how easy it is to make preserved lemons!

The varieties of lemon used to make Moroccan preserved lemons are called doqq and boussera. Both are round in shape, golden yellow to yellow-orange in color, thin-skinned and fragrant.

Boussera, which sports a flat apex and prominent nipple, is the variety shown here. 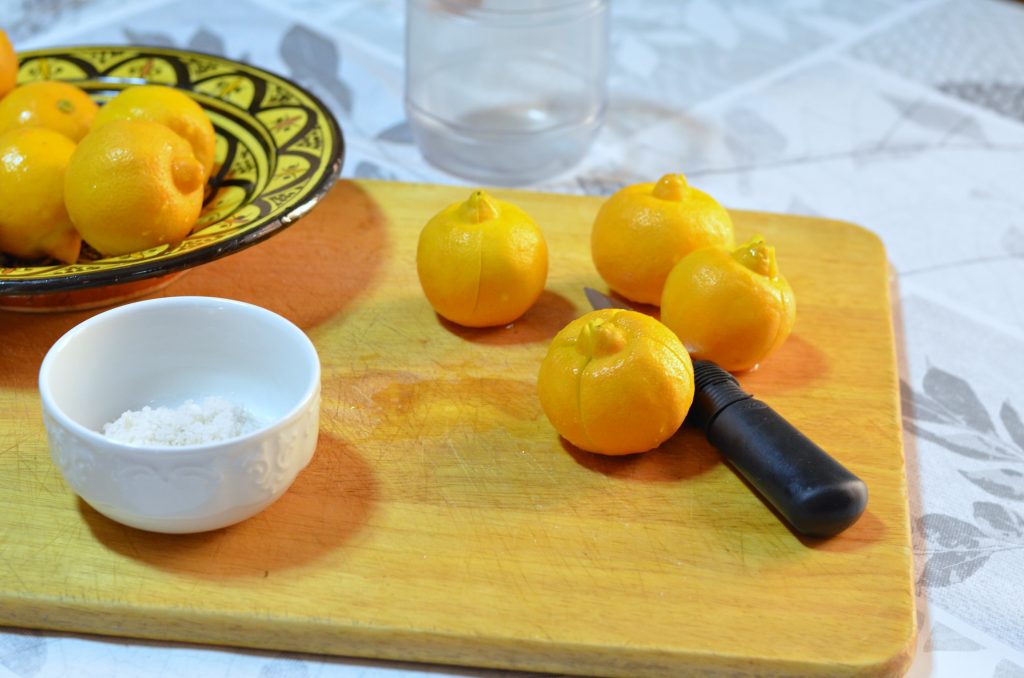 Outside of Morocco, you’ll probably find Meyer lemons to be the best choice. If Meyers aren’t in season, look for Eureka.

Otherwise, use whatever variety can be found. Most supermarket lemons, however, will be more acidic, larger in size, and thicker-skinned than the Moroccan varieties.

I’d suggest buying around 10 to 12 lemons if you’re making preserved lemons for the first time, but there’s no set quantity. Wash them well before proceeding.

For every 10 lemons, set a few aside, then get to work with the bulk of them.

Salt is the key to making simple, unadulterated preserved lemons. You salt the lemons. The lemons release their juices. And voila—you have lemons pickling in their own juices. It’s truly that simple.

To get the pickling-preserving activity started, you need to cut the lemons into four attached wedges. Do that by slicing the lemons from top to bottom without cutting all the way through. 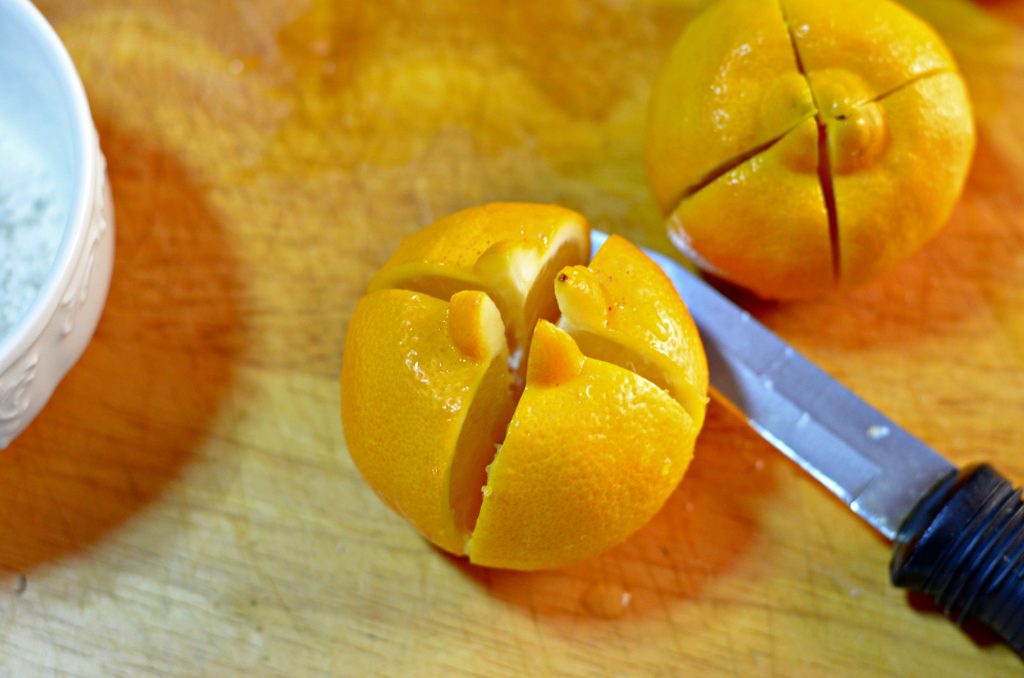 Cut the lemon into four wedges. leaving them attached at the base. Photo: Christine Benlafquih | Taste of Maroc

Pry the wedges open, but be careful not to detach the wedges. Generously fill each crevice with coarse kosher salt, then close the lemon as much as possible. 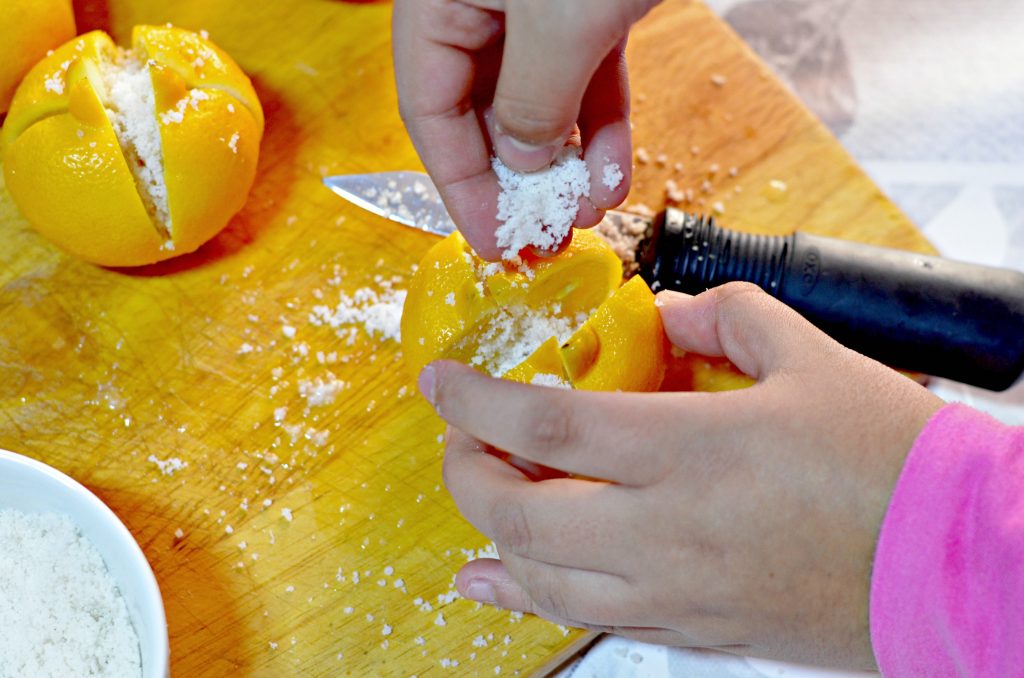 Fill the crevices of each lemon with salt. Photo: Christine Benlafquih | Taste of Maroc

Step 3 – Pack Those Lemons Into a Jar

Transfer the salted lemons to a clean jar that’s barely large enough to hold them. Purists will insist on using a glass jar but the plastic jar I used here worked fine. 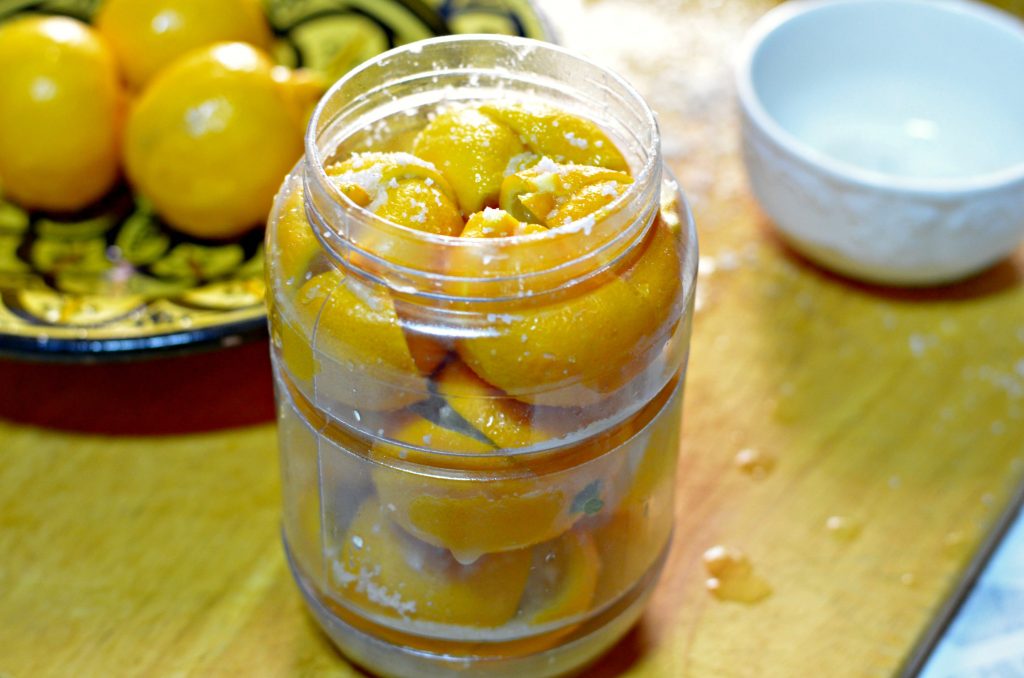 The most important factor aside from the jar’s cleanliness is size. The goal is to eventually have tightly packed lemons covered in juice.

If there’s too much room in the jar, the uppermost lemons might rise to the surface once they soften. Long term exposure to air is a no-no, so select a jar that truly requires packing and squeezing those lemons into place. That squeezing helps release some of the juice from the onset, which is a good thing.

Once the lemons are packed as tightly as possible, cover the jar and set it aside for a few days.

After a few days, the salted lemons will have begun to soften and macerate, creating more room in the jar.

Salt one or two new fresh lemons (or however many lemons will fit) and pack them into the jar with the others. Cover and set the jar aside for a few days, repeating the entire process until the jar is as full as it can be. 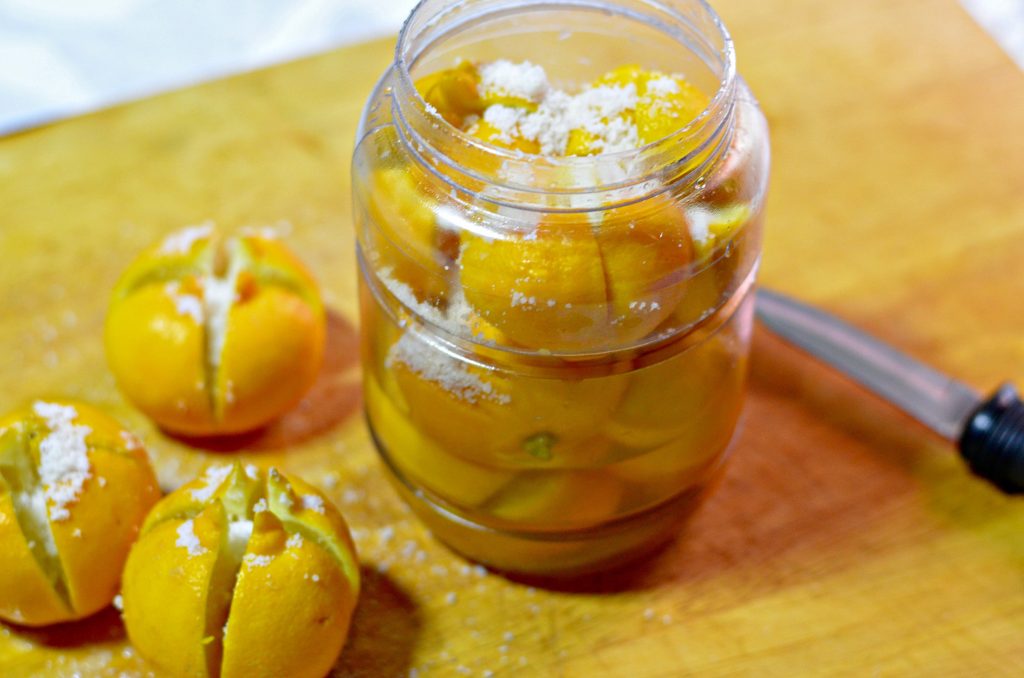 After several days there will be room to add more salted lemons to the jar. Photo: Christine Benlafquih | Taste of Maroc

This is what the jar looked like three days later. The lemons had compressed and released quite a bit of juice. I was able to squeeze in another three salted lemons.

When no more lemons can be added, cover the top layer of lemons with salt.

Make sure all lemons are tightly packed and submerged in juice. If they’re not, compress them further and add enough freshly squeezed lemon juice to cover them. 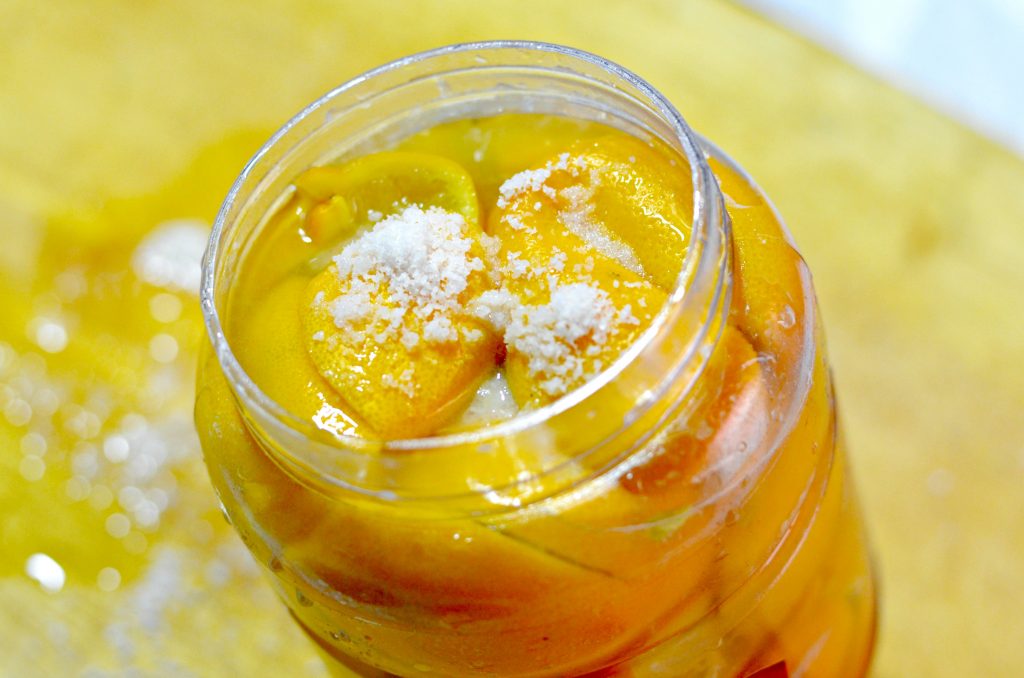 When no more lemons can fit, top them off with more salt and lemon juice to cover. Photo: Christine Benlafquih | Taste of Maroc

Close the jar, place it in a cupboard, and leave the lemons to cure for at least one month or for as long as a year. Thicker-skinned lemons will take longer to cure than thin-skinned varieties.

The longer preserved lemons are left to age, the more mellow in flavor, darker in color, and softer in texture they will become. This is a good thing!

Now that I’ve opened the jar, they’ll go into the fridge because I don’t want them to soften beyond this. Plus, the fridge avoids the worry of mold now that I’ll be poking into the jar occasionally. 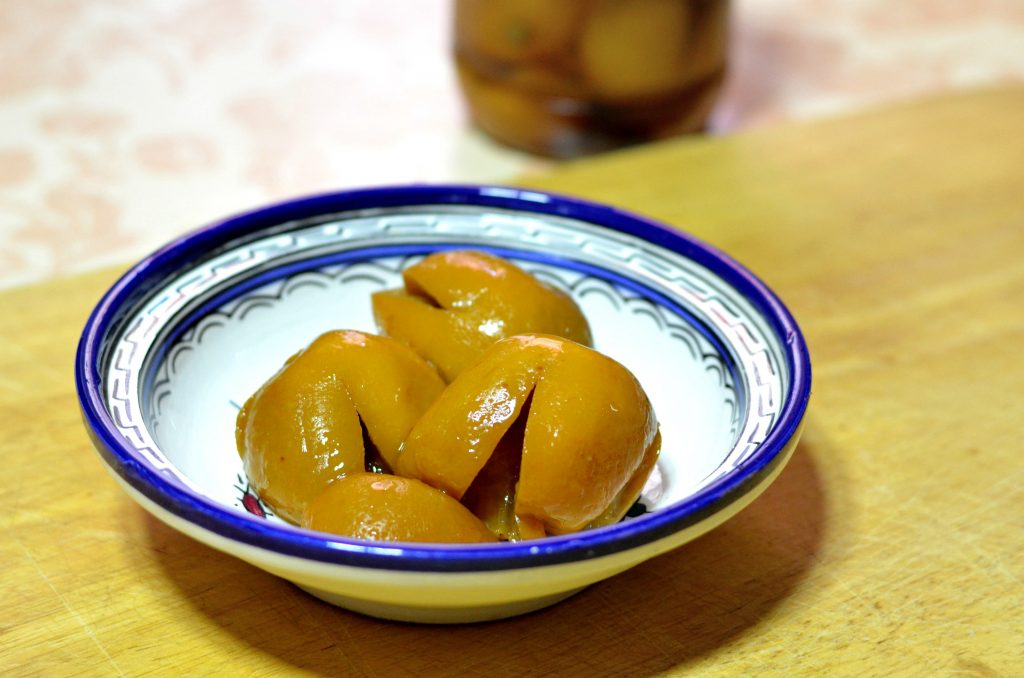 You don’t need to age the lemons to this degree of softness. They will indeed be ready to use after just a month or two, in which case they’ll be firmer in texture and will more closely resemble the lemons in the photo at the top of the page.

Don’t worry if an oily looking layer shows up on the top of the brine. It’s perfectly normal and isn’t cause for concern unless mold is present.

Rinse the lemons before using to clean them of the brine and excess salt, but be forewarned—preserved lemons are by nature salty,  and that saltiness will be imparted to any dish calling for them. Take that into account when seasoning stews, sauces, or salads.

If you visit Morocco, you’ll notice that the preserved lemons sold in shops and souks are usually left whole.

If you prefer that to the attached-wedge method, be sure that you have a thin-skinned variety of lemon such as the doqq, boussera, or Meyer mentioned above. 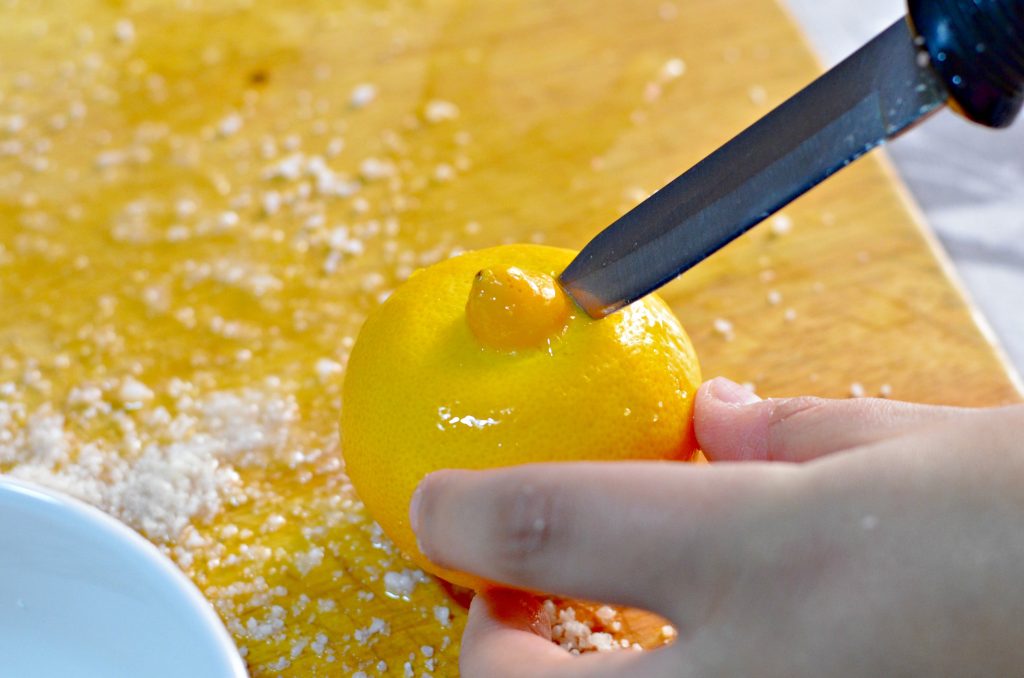 If you want whole preserved lemons, cut a slit rather than wedges. Photo: Christine Benlafquih | Taste of Maroc

Make a deep slit or two in each lemon near the nipple. Pack them into a clean jar with lots of coarse salt between lemons.

Every few days, compress the lemons to make room for another lemon or two, until no more lemons can be added and the top lemons are completely submerged in lemon juice brine.

Set the jar in a cupboard and allow time for the lemons to cure and soften. This will take a bit longer than the wedge method since less of the lemon is exposed to the salt. I’d suggest allowing at least two months before using them. 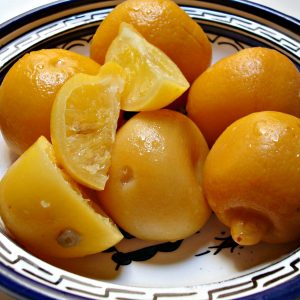 Christine Benlafquih | Taste of Maroc
Two simple ingredients and a few minutes of your time are all that's needed to make homemade preserved lemons. In Morocco, we use salt and lemons only and do not traditionally add embellishments such as cinnamon, bay leaves or other spices and herbs. Leave the lemons to cure for a month or longer before using. The longer they sit undisturbed, the more mellow and intense in flavor they become.  See the notes for advice on which lemon varieties to use.
4.75 from 4 votes
Print Recipe Pin Recipe Save Recipe Saved!
Prep Time 10 mins
Curing Time 30 d
Total Time 7 hrs 22 mins
Course Spices and Condiments
Cuisine Moroccan
Yield 10 preserved lemons
Calories 6 kcal
Prevent your screen from going dark

you suggest a brine of lemon juice/water. Proportions of this please, thanks!

I use only lemon juice when needed, not water. The salt will help the lemons macerate and release their own juices, and then fresh lemon juice might be added to the jar so that the lemons are fully submerged.

Thank you for posting. I am definitely going to make it. My question is, what exactly do you do with the finished product? Thanks.

I have done the lemons before, turns out great. However, I was wondering if it is possible to do without all that salt. My brother is very conscious of his salt intake. I assume it would be possible but how long would they last?

Hi Lynette. I'm not certain that you can cut back significantly on salt when making your own preserved lemons and get great results. What your brother could do to reduce salt intake from the preserved lemons is to rinse them before adding to the pot or dish, or use them only as a condiment at serving time. If you want to flavor the sauce of a specific dish, you can add a few wedges to the pot only for the last few minutes of cooking, then retrieve them from the pot and garnish the dish with them. If cooking in a tagine, place the preserved lemon wedges on top of the food rather than down in the base so that extra salt isn't added to the sauce.

Can any spices be added to the lemons after salting to give a slightltly exotic flavor? How about whole pepper, coriander and star anise?

Yes, of course. I've seen versions that call for cinnamon sticks or bay leaves, and I'm sure a quick search will reveal other additions. However, in every day Moroccan cooking we mostly use lemons that have been preserved with salt alone.

Thanks for posting this recipe. I tried it and am now waiting for the lemons to be ready.

Hope they turn out well for you! If you're able, please update us with your results.