Moroccan cuisine has a vast array of chicken dishes. Whether the birds used are beldi (free range or country chicken) or roumi (standard battery chicken), they must undergo a specific process of cleaning and brining before they are considered ready for cooking.

Thorough cleaning and brining of poultry is a serious matter. It’s believed to be fundamental to the taste and texture of the final dish. Having grown up with this, I find it hard to order chicken dishes in restaurants as this detail is probably missing from the dish’s preparation.

I grew up in a family of busy women looking after their families but also after their careers. For them, Saturday morning was a market day when food and groceries had to be secured for the coming week. A trip to the market was always followed by food preparations and cleaning.

Many weekends, my late father (and now, my mother) would go to the market and order 20 to 25 chickens and cockerels (coquelets) from the seller. The birds immediately went to the “guillotine,” followed by a hot water bath and the feather plucking machine. After he was done with his shopping list and had loaded the car, my father picked up the chickens and headed home.

Cleaning and Brining the Chicken

While my father was doing his weekly shopping, my mother would prepare two large buckets of water and a couple of smaller buckets.

But before the brine bath, each chicken had to be meticulously looked over and cleaned. Giblets (and any accidentally found egg—without shell, would you believe?) would be separated and set aside in one of the small buckets. We would use those livers, hearts, necks and gizzards (el kanssa) later on in specific recipes.

Unwanted bits went into another small bucket which was designated for trash. All in all, it was a heavy chore for whoever was around to help. 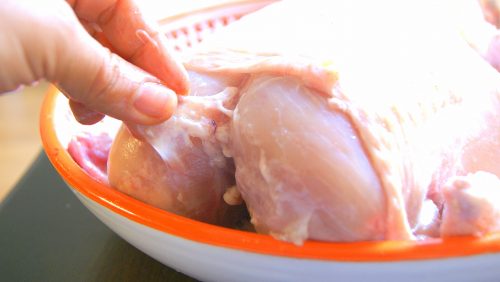 The poultry would remain in the brine for a few hours. In addition to tenderizing and improving flavor, the brine bath helped with the final cleaning that followed, as unwanted bits became easier to detach. The brine also helped eliminate any remaining blood and impurities, which is in line with Islamic guidelines.

After the brine, each chicken would be processed one by one to remove lumpy or slimy fat trapped between the skin and the meat, as well as any remaining bits of feather and plumes. In Moroccan cooking, it is essential to get rid of these bits or the cook will be in hot water. The skin would be left intact since it protects the chicken afterwards and gives a nice crust in the case of roasting.

A final wash in fresh water was mandatory, then the birds would be set aside in colanders or big baskets to drain.

Next, the chicken had to be prepped for the freezer. Some were left whole and some were cut into six pieces, ready for tagines and stews. Others might be boned and filleted. All were bagged and put into the freezer, to be consumed in the coming weeks.

After all this exhausting work, the work surface had to be deeply cleaned with bleach and lots of water.

The process I follow is outlined below. It really makes a difference to the final dish. It is important to limit the work space so it will be easy to clean with detergent and hot water after the task is over. 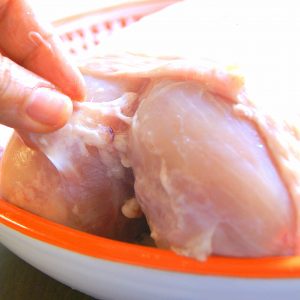 How to Clean and Brine Chicken

Nada Kiffa | Taste of Maroc
Cleaning and brining chicken is an essential step in Moroccan cooking. We believe it enhances the flavor and tenderizes the chicken while also removing an undesirable after-taste and bad smell.In my small kitchen, I usually handle one to two birds, and I brine them in salty water with the addition of lemon and vinegar. The usual ratio I use is 10% of liquid is from the acidic additions but this is just a suggestion.
5 from 1 vote
Print Recipe Pin Recipe Save Recipe Saved!
Prep Time 10 mins
Brining Time 2 hrs
Total Time 2 hrs 20 mins
Course Main
Cuisine Moroccan
Prevent your screen from going dark

First Cleaning of the Chicken

Second Cleaning of the Chicken

I remember doing this every Saturday with my mum. We even on occasion slaughtered the chickens ourselves at home, and not once did anyone in the family fall sick!! I too ignore ‘western’ guidelines to not wash meats and stick to the traditions my mother taught me.

I agree. I feel much better washing meat and when it comes to chicken, brining makes a very positive difference.