The cooking of the old Moroccan imperial cities follows a codification which defines the guidelines for preparing everyday dishes and some cooked salads. Traditional recipes calling for a broth or sauce are usually divided into one of several distinct Moroccan cooking styles. The codification for each cooking style helped keep traditional recipes consistent throughout time and eased the process of transmission from one generation to another.

Spicing or Seasoning a Moroccan Dish

Each classification of Moroccan dishes relies on a set of spices to build a unique flavor profile and give a specific hue to the dish. Consider those spices as a code that will help you cook Moroccan dishes in a smart way. If you know a particular cooking style’s code, you won’t need to look up a recipe in order to execute it; you’ll be able to rely on the main guidelines.

The sauce (or marqa as we call it locally) defines whether or not the dish has been prepared by a good cook. The criteria of a good sauce are not many—it comes down to the texture, the hue, and finally the flavor.

Sauces in Moroccan cooking are usually the result of a slow-cooking method, such as simmering in a tagine

or stewing in a conventional pot. Depending on the recipe and the cooking vessel, the sauce can vary in texture. In most cases, however, it is a ck, reduced sauce which is most highly sought.

Marqa is from the Arabic word maraq (مَرَق ), which translates to broth. The broth is where the main ingredients will cook at a boil or simmer, and at the end of cooking the broth will be reduced to a thick or syrupy texture.

How a cook gets to the final result may vary. If we take as example a dish calling for meat, some start by sauteing the meat in oil and spices before adding water; others kick off the cooking by boiling the meat in a spiced short broth before adding additional liquid for longer simmering. In both cases, the dish will finish with a reduction stage.

The marqa resulting from Moroccan-style slow cooking is a fragrant, seasoned sauce. The initial bouillon is naturally done without the addition of enhancers or stock cubes. When the sauce has reduced and thickened, it is a concentration of flavors from all the components of that dish—the spices, the meat and often and the flavors of the fruit or vegetable cooked in it.

Marqa as a Cooking Statement 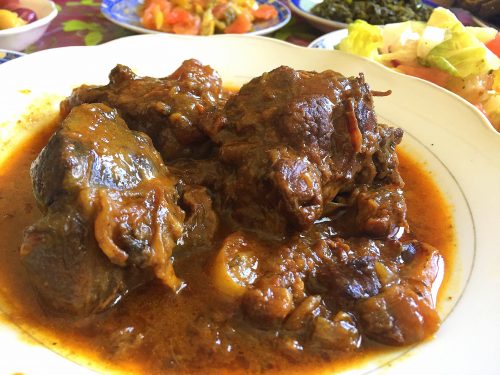 A version of Moroccan meat with a generous marqa. Photo: Nada Kiffa | Taste of Maroc.

Some like their marqa to be saucy and runny, but it’s the oily, sticky marqa that stands out. That may not be the healthiest as it usually calls for a decent amount of oil to reach that consistency. This texture of marqa is mentioned in many Moroccan proverbs which link the best cook to one who makes a well-set, syrupy marqa; anything less is not good. So much so that for many Moroccans, marqa is called l’idam which simply translates as fatty “fond.”

The quality of marqa in the dish is the signature of the cook and her reputation. The sauce or marqa helps feed a family to satiety, even if the dish is frugal or austere. Moroccans use khobz (Moroccan bread) to soak up the sauce and fill up even before getting to their portion of meat (if any) and vegetables. This is particularly pertinent if the family has only a modest income or is poor.

It is also pertinent as Moroccan tables are not served the same way; working class or well-to-do families tend to serve small plates of Moroccan salads and starters around the main dish so the family has a variety of food from which to eat their fill. This is not necessarily the case in poorer homes. Nor is it the case in certain regions of Morocco where serving accompanying salads is not an obligation. 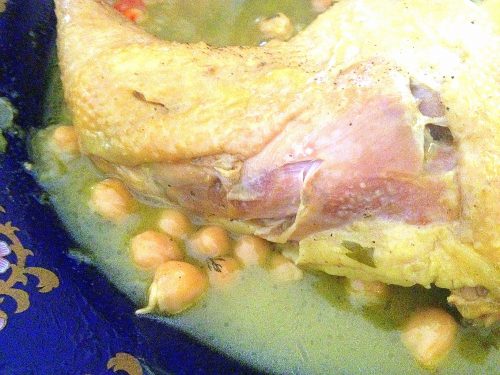 It may seem funny, but in the Fez tradition (and other major cities with an imperial past), we cook following a logic of how the dish should look both in texture and color. The sauce, meat (if used) and the vegetables or fruits should be prepared in a codified way with certain spices to deliver an expected outcome. Any mishap resulting in the wrong hue can haunt a cook for a while.

I believe this codification is why traditional Moroccan recipes have remained consistent over the centuries. Professional Moroccan cooks called tebbakhates help preserve the culinary traditions by sharing the recipes orally and by following the codification religiously to dish up memorable meals.

Before anyone in my family shares a recipe, they start by placing it in a category. As example, to cook meat with artichokes, you first learn that it can be cooked qadra style or m’qualli style. This way, you already have a path to follow. Sometimes the path or style will be the only guideline given to reproduce the dish, there will be no measurements and no detailed instructions.

We are expected to figure out a recipe from its categorization. If the recipe calls for an addition, then the message might be, “M’qualli with a generous amount of garlic” Or, we might get something like, “Qadra on the sweet side,” and we would understand that to mean to the addition of a cinnamon stick and probably a touch of honey or sugar. We know that a “spicy mchermel” means cayenne or harissa should be added. And that’s how we learned how to cook.

Moroccan Cooking Styles and Their Colors 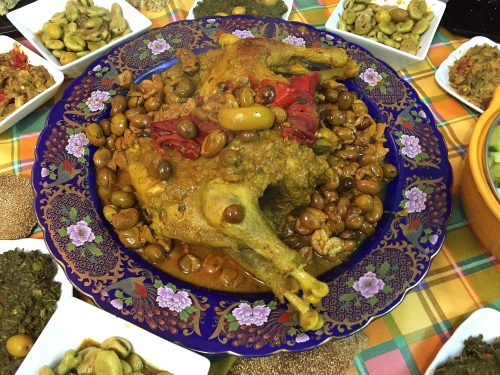 The various Moroccan cooking styles can be defined by their color, which results from the spices and the cooking method. Initially you may think different style dishes look similar, but after seeing more examples and becoming more familiar with Moroccan cuisine, the differences will become more apparent.

Yellow and red are two colors associated with the primary Moroccan cooking styles. M’qualli and qadra have yellow sauces while m’hammar and mchermel style dishes have red. The colors are a result of the primary spices and fats used in each cooking style.

A yellow hue is the outcome of the m’qualli cooking style. Saffron and ginger are primary spices. The oils used can be a mix of vegetable and olive oil; in some instances a touch of smen is required.

In qadra dishes, a yellow hue results from the use of saffron, pepper (black, white or mixed), and a generous amount of onions. Butter and/or smen are the main fats used, although some dishes from this category use a mix of vegetable and olive oil. It is a very famous method in cities such as Fez, Meknes, Marrakesh and Rabat. It is reputed for being a delicate style with a light marqa.

A red hue is the main signature of m’hammar style dishes due to the use of paprika. The main spices are sweet paprika and cumin, but chili or harissa can also be used. At the end of cooking, the meat used to be sauteed in melted smen (which had been used to cook the dish from the beginning) to deepen the red color. Now, however, oven-roasting replaces sauteing as the finishing method as it improves texture and gives the meat a deep mahogany color. The most famous dishes calling for this style of cooking are reserved for special occasions.

The red sauce of mchermel style cooking is well-seasoned and can be herby. It calls for the same spices and herbs used in Morocco’s iconic chermoula, and the dish might include grated tomatoes or tomato paste. (Note that an herbless version of chermoula is what is used to make m’hammar.)

M’hammar or m’chermel dishes can have preserved lemons added to the marinade or the cooking sauce. In some regions, m’qualli does too, but a qadra can not have this addition.

M’qualli and qadra in their basic forms can be the same, especially since some cities include ginger as a primary spice in their qadra. However, ginger is not allowed in a traditional Fassi qadra, although people are coming to terms with its addition.

Qadra is the base for another category of dishes called t’faya. It is not conceivable to have cumin or paprika in a qadra or a t’faya but it is perfectly okay to add saffron to a m’hammar or a mchermel, although in the latter, using the saffron will be a waste as the other elements will overpower it.

When I lived in Morocco, I was advised to rub chicken with a package of yellowish ‘colorant’, This was instead of the more expensive saffron. I’m wondering what that was? Thank you!

I don't see many people using this artificial colorant anymore, but it was definitely popular when I started cooking Moroccan food in the 1990s. Not only is it terribly messy, but people are becoming health conscious and want to avoid chemical additives and artificial ingredients. Most use turmeric instead (alone or in combination with saffron threads), which is completely natural and so much healthier. Here's an old photo of the Moroccan food colorant.

I really appreciate this article so much. I had no idea all these techniques and info about the different cooking style. I just thought that all the dishes had cumin, paprika, and tumeric in it. I look forward to making these dishes for my husband and the in laws and sharing my knowledge and Moroccan words with them.

This is so informative but I am going to have to print it off to try and help me remember all this info.

It's long but really worth it!

wow this is a super helpful post, I have been gradually observing these styles of sauces, but you have put all the pieces together for me - thank you

Thanks Cat, glad you liked the article! Nada