M’qualli, mqalli, m’qalli, or mqualli (Fr: rissolé, Ar: مْقَلِّي) is the most common cooking method in Moroccan cuisine. We use it for special events but also for ordinary days. Once you master its logic and its meaning, you will own the key to dozens of Moroccan dishes. 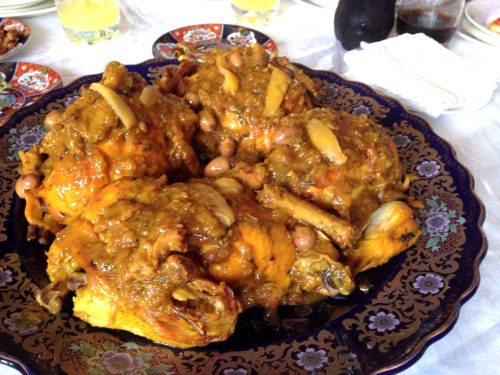 In the Moroccan dialect, m’qualli literally derives from the word for “fried.” In actuality it’s a long sauteing process rather than frying as we know it. And while European cooking sometimes calls for searing the meat first, this method calls for searing it in the last stage of cooking, trapping all the melt-in-the-mouth texture after the meat has fully been infused in juicy broth or sauce.

Every m’qualli recipe has at least ginger and saffron as primary spices. Turmeric or an artificial colorant is usually used as well, giving the sauce a characteristic yellow color. Depending on the recipe, garlic, onions (the amount can vary),  some cilantro and/or parsley, as well as black and white pepper may be added. For a sweet version, cinnamon stick will be included and the amoung of herbs and garlic will be reduced or omitted.

The signature sauce of a m’qualli appears rather oily because the onion sauce, called daghmira,  separates from the oil after a long period of cooking and stirring. This separation is proof that the cook has mastered the dish.

When the sauce has been properly reduced to this stage, we describe it as waqfa or “set” and that is where the m’qualli logic happens. When it’s a chicken dish, the same oil may be used to saute the meat in what is known as the second phase of cooking; this depends on the recipe as this step is not always needed. Until today, the best tabbakhates and dadas (professional cooks and keepers of old traditions) use this method to prepare the most memorable m’qualli, giving the chicken a slight amber color before it’s presented for serving at special occasions such as weddings.

However, on ordinary days when it’s about feeding a large family, the cook tends to thin the sauce and turn it to marqa with runny texture. This, too, is dear to Moroccans as we like to soak mouthfuls of Moroccan bread in it.

Type of meat for m’qualli

In its most famous form, m’qualli instantly brings to mind the famous chicken with olives and preserved lemons. However lamb, veal, beef, rabbit, goat or fish are also used to make different dishes under this category. 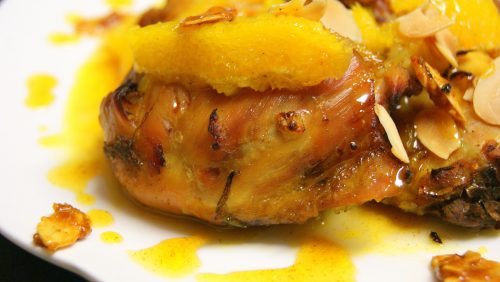 Chicken m’qualli with oranges and a syrupy fond is a Marrakesh specialty dish. Photo: Nada Kiffa | Taste of Maroc

As already mentioned, a m’qualli’s thick onion sauce or gravy is referred to as daghmira. It’s the result of slow cooking and the concentration of flavors is truly incredible due to the seasoning and the attention given to it. It results when onions cook to silky tenderness in the same sauce where meat or poultry slowly simmers. This sauce will garnish the meat at serving. If one has to choose between the two, you could literally skip the chicken but fight for an extra serving of that onion gravy. Some people shortcut this process by using a blender at the end of the cooking process or add some starch to have a thick onion gravy but the traditional method is far better taste-wise.

However, a Marrakchi version of m’qualli may not call for as much onion—only one might be used for a whole dish—resulting in a slow-cooked, syrupy sauce that’s equally delicious. 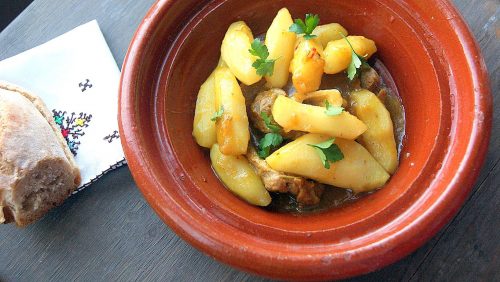 At special events, a m’qualli of chicken garnished with olives and preserved lemons is one of the most common dishes in many areas of Morocco. But chances are another type of m’qualli—sweet and savory—could be served aw well; most famously this type of m’quallis is represented by Morocco’s much-loved dish of meat and prunes.

Nowadays, a chicken cooked to tenderness m’qualli style often goes into the oven for a second phase of cooking rather than the traditional frying. This brief roasting offers a superb contrast of textures—a moist meat with a crusty outer layer—which is complemented by the m’qualli sauce. It has become a favorite cooking method and people find it easy and healthier to some extent. 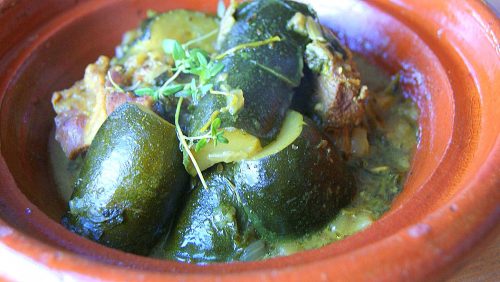 There is some confusion among Moroccans themselves as to whether or not a roasted chicken m’qualli can be called a m’hammar, since many of us have moved from frying in the second stage to oven roasting—hence using a “m’hammar” cooking step. In the context of a m’qualli dish prepared this way, m’hammar would be referring to roasting. However, traditionalists don’t agree with the use of the term in this way since a true and classic m’hammar is reddish in color due to heavy use of paprika in the sauce or the marinade.