M’hammar is a traditional Moroccan cooking style which gives meat or poultry a deep mahogany color. The accompanying sauce also has a reddish hue. 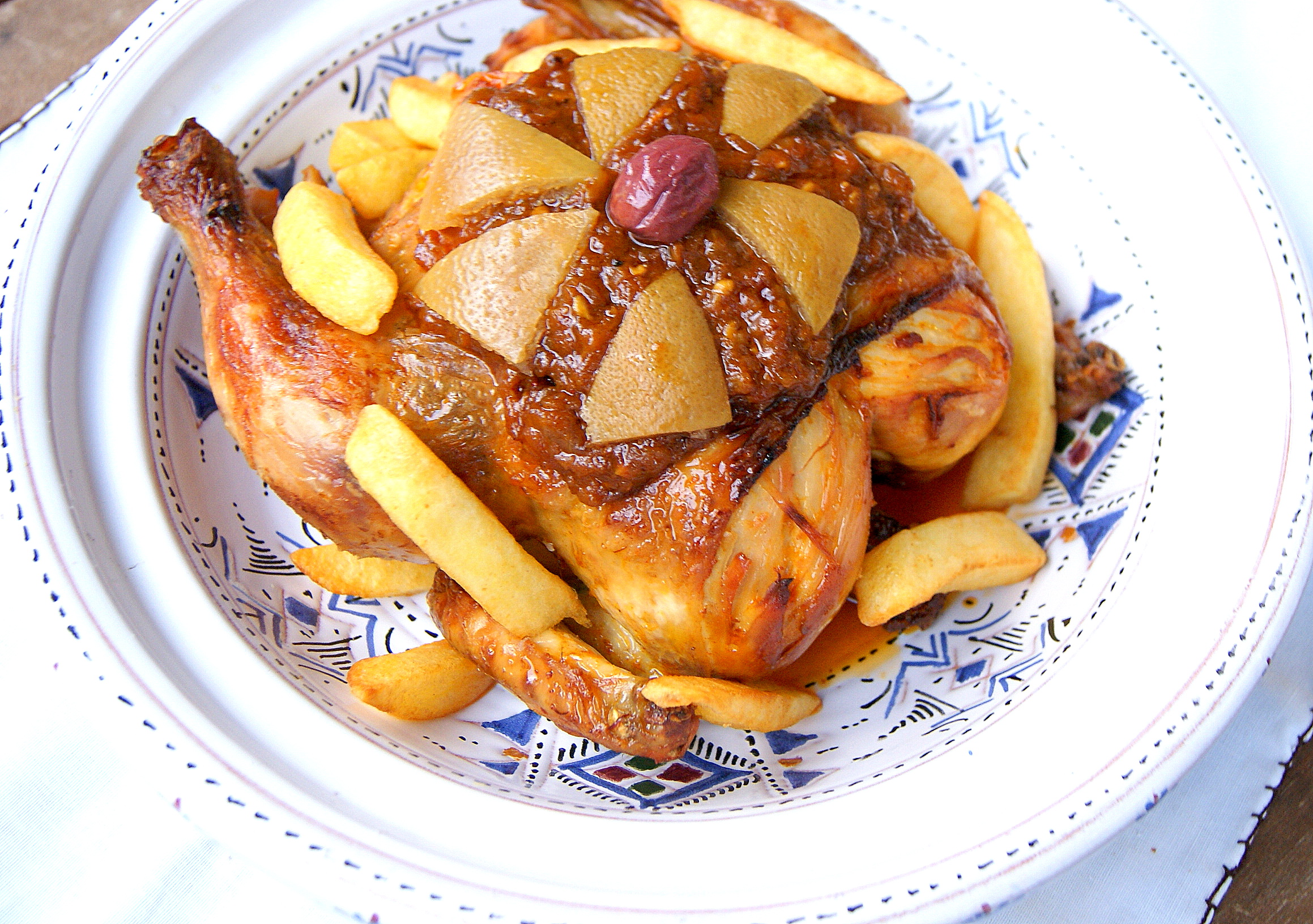 M’hammar, mhammar or hammer (Fr: roussi, Ar: مْحَمّر) is one of the cooking styles that codify Moroccan cuisine. It’s a slow-cooking method with two different cooking stages—stovetop in a pot followed by roasting or frying—and it always has a savory flavor profile.

In its classic form, a m’hammar dish is rather heavy due to the amount of smen (or butter) and oil used to cook it. And, if preparing chicken this way (djaj m’hammar), the skin is normally left intact, so that will add to the “heaviness” as well. We do have a a modern way to roast poultry with the skin removed, which can help reduce fat and calories. This light version is not as good as the traditional but it’s a close second.

Although practices might differ from one area to another, this article will explain what Moroccan m’hammar is all about.

The name m’hammar comes from ah’mar, which is the color red in Arabic. (Do not confuse this word with h’maar, which means donkey.) In traditional m’hammar recipes, we are looking for a mahogany-red color to meat or poultry which is achieved with the following two-step process:

It is worth mentioning that the cooking styles of m’hammar and m’qualli are commonly confused, especially among the young generation of cooks or foreign amateurs of Moroccan cooking. There are a few reasons for that, but mostly it’s due to the proliferation of blogs and YouTube channels showcasing home Moroccan cooking where we see a loss of old traditions and the rise of new ones.

You can actually cook a bird m’qualli style, fish it out of the sauce, then roast it for about 20 minutes from all sides while you reduce the sauce to desired thickness. Although the chicken is finished by roasting, the dish will still be m’qualli and not m’hammar as some call it. The general use of the term m’hammar for any type of roasted chicken can be misleading, because a classic chicken m’hammar will be made as described here.

In definition, the major difference between a m’hammar and a m’qualli remains in the use of paprika, which may be paired with harissa or chili cayenne for a kick, and the amount of smen. In Fez, m’hammar is decorated with almonds while m’qualli welcomes the use of preserved lemon and olives whether in the cooking or as garnishing.

Before, the rules were very strict but now these frontiers are becoming blurry. Recipes get exchanged  and adapted and regional differences that used to make a rich palette in Moroccan cooking are either merging or slightly fading away.

M’hammar is most likely to be served at special events and gatherings due to the time involved in making this traditional dish. As example, m’hammar with lamb is widely associated with Eid al Adha; in Fez it’s one of the main recipes made during this festive season.

Meanwhile, m’hammar of chicken has always been part of wedding celebration menus and is usually served just after pigeon bastilla. Such dishes are usually left to the capable hands of tabbakhates, professional cooks who specialize in traditional Moroccan food. Their reputations must be impeccable when it comes to cooking, and many were former dadas or inherited dadas’ recipes.

M’hammar is easy but lengthy to prepare.

In Sephardic cooking, m’hammar refers to a thick fritatta or tortilla with vegetables called meguina. It looks like a savory cake dotted with chopped vegetables. Although it looks easy to make, it requires a skillful cook to get it right. This recipe stands out from typical Moroccan usage of the term m’hammar.

Apart from this exception, m’hammar dishes across Morocco will call for meat or chicken and come in the following variations:

Whichever recipe of m’hammar you have on hand, give it time and love when making it. It is one of the most unforgettable ways of serving a lamb or a chicken and it may become your show-stopper. I serve it as Sunday roast every now and then and it never fails to impress.

Nada, I need an actual recipe. Sorry I am not that creative.

You can use the recipe for mhammar of meat and add chili and half a handful of chopped coriander and that should do.

Please just give a recipe. Your website is becoming very confusing, discussing food in general categories, but not giving a recipe. Christine, I much preferred your format in The Spruce, where the ingredients and specific directions were given.

Sorry that you feel frustrated. Some articles in the general categories are designed to educate people on the common flavor profiles available in Moroccan cooking so they get to cook as authentic Moroccan cook who do not use recipe books to get on with their daily cooking. Sometimes recipes follow and sometimes they don't as the site has not been running for that long yet.

There is only a small number of no-recipe articles so I hope you will still be able to experiment with the large range of recipe article available on the site.