If you have any connection to Fez or have been brought up eating Fassi food, you might have reached a saturation point with qadra or kadra in all its forms.

Qadra is one of the primary Moroccan cooking styles or methods. Among them, it’s the easiest and yet the most restricted when it comes to spices. It is said to represent the finest and most luxurious dishes of Moroccan cuisine. Saffron and butter are essential; they enchant the palate while pepper brings a balanced note of spiciness.

The term qadra comes from the Arabic word kdr, qdr, qidr which is a deep cooking pot. In many parts of Morocco, such a pot is referred to as a guedra. The bottom of a couscoussier

is the perfect example.

When making a qadra, a pot must be used and never a tagine

. The sauce should be light and broth-like. Saffron, turmeric, salt, pepper (white and/or black), cinnamon, herbs (mainly parsley) and smen (Moroccan preserved butter) are the main aromatics in this style of cooking.

A qadra can range from a soup to a main dish. It can also be a consommé, albeit with more onions in the mix. As such, it needs meat with a strong or even gamy flavor. As example, during Eid al Adha, my dad always insisted on making a kadra with sheep’s “fries,” a polite word for testicles.

As a main dish, qadra is a sort of stew which, as mentioned, should be cooked in a deep pot and never in a tagine. Its broth is noticeably lighter than a m’qualli’s sauce or marqa, and its preparation requires a significant amount of onions. Moroccan bread is welcome to soak up that sauce and scoop up onions.

Those onions play an essential role in qadra dishes, so their quality and type is important. The onions not only give texture to the sauce but they should also bring a natural sweetness to complement the warmth of the cinnamon.

Qadra is a variation of t’faya. The two share a centuries-old historic background and they are similar to each other as far as spicing and methods of cooking are concerned. 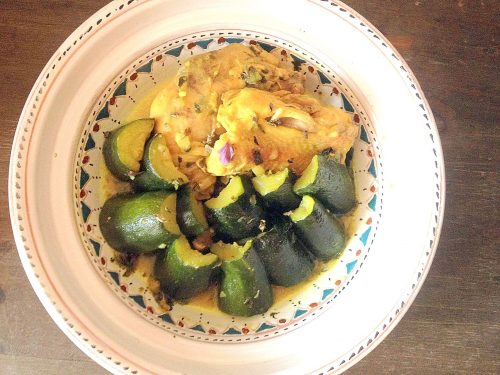 There are many qadra recipes. However, there is one main rule that can’t be ignored, especially in the traditional cooking of Fes—there should be no ginger or hardly any at all. In other cities, adding this particular spice is fine and it’s actually required in many of the everyday dishes which are qadra style. Many Fassi people are changing their minds about this rule, for the better.

The most modest version of qadra is made using chickpeas and chicken while the most posh version uses pigeons, quails and blanched almonds, which should cook to tenderness directly in the broth (never toasted or fried).

Unlike m’qualli, m’hammar or mchermel, there are recipes for soups that fall under qadra style. Their broth is fragrant, light and warming.

Most if not all Moroccan recipes calling for a sweet topping have a qadra or m’qualli base, depending on region or city. In these cases, the qadra sauce includes a cinnamon stick and a hint of honey to complement the sweet topping and highlight the sauce’s saltiness; garlic might be omitted in some regions.

A qadra style stew can be made with different vegetables. However, when we serve a big family with children, we tend to add diced potatoes, which are always everyone’s favorite. They absorb the saffron broth even while complementing it.