Chebakia (or mkharka) is a traditional Moroccan favorite in Ramadan and at special occasions. Honey, sesame, cinnamon, saffron, anise and orange flower water all contribute to the delicious sticky-sweet flavor of these flower-shaped cookies. 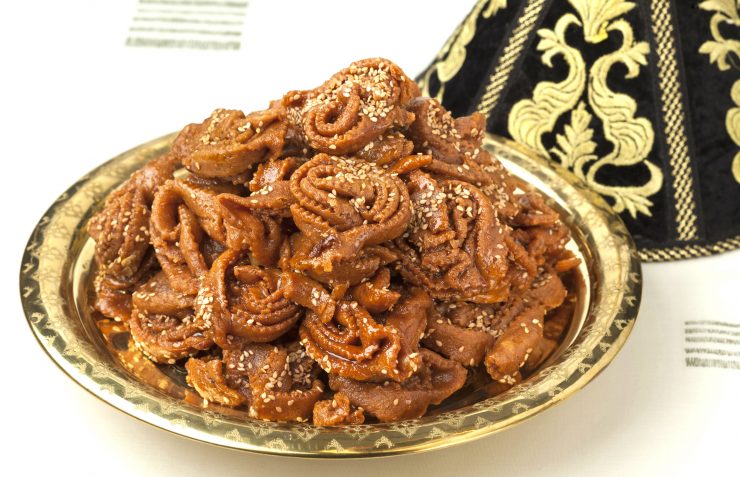 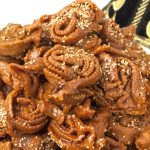 Halwa Chebakia – or simply chebakia – is a honey-coated Moroccan sesame cookie famously associated with Ramadan and special occasions. Also known as mkharka, the cookie is made by folding rolled-out dough into a flower shape, frying it and then dipping it in hot honey flavored with orange flower water.

In Ramadan, when chebakia is especially popular, many Moroccans enjoy the sticky-sweet cookies alongside a bowl of harira soup while breaking their fast.  They also appear at special occasions such as weddings or birth celebrations, and you can find them for sale year-round at bakeries and market stalls.

Chebakia can be time-consuming to make, particularly if preparing a traditionally large batch or if you’re unfamiliar with how to fold the dough into the flower shape. For that reason, women might gather to make lighter work of the task. Several of my in-laws, for example, will get together a week or so before the start of Ramadan to make enough chebakia and sellou to last the entire month of fasting for all of their families. This can equate to a full day in the kitchen, even with three or more sets of hands.

The following photos show how to make chebakia following my sister-in-law’s Halwa Chebakia Recipe below. Not every Moroccan home cook is skilled at making them, so don’t worry if you have trouble mastering the folding technique. Even a misshapen cookie will taste delicious when finished! I’m only showing one folding method, but there are other ways to shape the cookies into a classic flower design.

The chebakia recipe calls for a large amount of golden unhulled sesame seeds. Ahead of time, pick through them to remove dirt and debris, and then toast them stovetop in a skillet over medium heat, stirring constantly, or in a 400° F (200° C) for 10 to 15 minutes.

Allow the toasted sesame to cool completely before proceeding with making the dough. You can toast the sesame ahead of time and store in a covered container until needed.

Make and Knead the Dough

When you’re ready to make the dough, grind a bowlful of the toasted sesame seeds until they’re powdery, and then a little longer until moist enough to pack when pressed together. Blend the ground sesame with your other dry ingredients (flour, baking powder, salt, anise, cinnamon, saffron, turmeric, mastic), then add the wet ingredients (egg, melted butter, olive oil, vinegar, orange flower water, and a little yeast dissolved in water).  Mix everything with your hands to form a dough.

The consistency of chebakia dough is very important for a good result. You want the dough to be firmer than bread dough but pliable enough to knead. A good example might be the texture and firmness of Play Dough. Add more flour if necessary to achieve this.

The dough then needs to be kneaded by hand for seven or eight minutes, or in a mixer with a dough hook for four or five minutes. In the photo above, we combined the dough ingredients by hand in the bowl of our stand mixer, and then used the mixer to knead the dough.

Divide the dough into four portions, shape each into a smooth mound, and place the dough in a plastic bag to rest for at least 10 to 15 minutes.

Roll Out the Dough

Take one of the portions of dough, and roll it out to the thickness of a thin piece of cardboard. Lightly flour your work surface if necessary.

Use a fluted pastry cutter to cut the dough into rectangles approximately the size of your palm. Make four evenly spaced cuts lengthwise in each rectangle. These cuts should be almost the length of the rectangle, but should not cut through to the edges of the dough. The resulting rectangles will each have five strips of attached dough.

Some people use a special chebakia cookie cutter to produce these rectangles, but I find a pastry wheel to be more efficient. A pastry wheel also allows me to control the size of the rectangle and make smaller cookies.

Once you’ve cut as many rectangles as possible, gather up the scraps of dough, mold them together, and return them to the plastic bag to rest while you begin folding.

Folding Chebakia Into a Flower Shape

Take a rectangle and thread the middle finger of your right hand through alternating strips of dough. In the first image below you can see that the first, third and fifth strips of dough are draped over the finger.

Next, with your left hand, pinch together the outer corners of dough which hang near the tip of your finger. This will form the center of the flower shape.

While holding the pinched corners with your left hand, allow the strips of dough to slide down off your right finger and gently turn them inside-out around the pinched portion.

If done correctly, you’ll have formed the dough into an elongated flower shape. If you want, you can lightly pinch the elongated ends to taper them.

Set the shaped dough onto a tray and repeat until you’ve used all your dough. Cover the folded dough with a towel until you’re ready to begin frying.

To help with the work flow, have everything set up and ready to go. Heat some vegetable oil in a deep skillet over medium low heat.  At the same time, heat some honey until very hot (it will begin to get frothy) and add orange flower water; keep the honey warm so it doesn’t thicken.

You’ll also want to set out a large bowl with a strainer, a platter where the chebakia can cool, and toasted unhulled sesame seeds to use as a garnish.

Working in batches, add the chebakia to the hot oil. Adjust the heat as necessary to slowly fry each batch of chebakia to a medium golden color. This should take about 10 minutes if the oil is the correct temperature. If the oil is too hot, the cookies will color quickly but the insides will not be cooked crispy.

When the chebakia are cooked, use a slotted spoon or strainer to transfer them from the oil directly to the hot honey. Gently push down on them to submerge them. Allow the chebakia to soak for 5 to 7 minutes. They’ll turn a rich, glossy amber color as they absorb the honey. In the meantime, you can begin frying another batch of cookies.

The longer you soak the chebakia, the more honey they will absorb, and the sweeter and less crispy they might become. How long to soak them is a matter of personal preference. However, too short of a soaking will result in pale-colored chebakia that eventually lose their glossy coating.

Remove them from the honey to a strainer or colander, and allow them to drain for only a few minutes. Gently transfer the cookies while hot to a large platter or tray, and sprinkle the centers with sesame.

As you finish soaking other batches of chebakia in the honey, simply drain and add them to the platter in a mound, garnishing each batch with sesame.

The photo above shows a full batch of the Chebakia Recipe cooling on a large serving platter. The batch of cookies weighed about 2 kg, or close to 4 1/2 lbs.

Allow the chebakia to cool for several hours before putting them in an airtight container for storage. They’ll keep at room temperature for a month or longer, and will freeze well for four or five months. 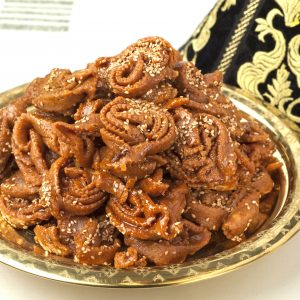 For Cooking and Garnishing

Ahead of Time - Clean and Toast the Sesame Seeds

Roll Out and Cut the Dough

Christine Benlafquih is Founding Editor at Taste of Maroc and owner of Taste of Casablanca, a food tour and culinary activity business in Casablanca. A long time resident of Morocco, she's written extensively about Moroccan cuisine and culture. She was the Moroccan Food Expert for About.com (now The Spruce Eats) from 2008 to 2016. 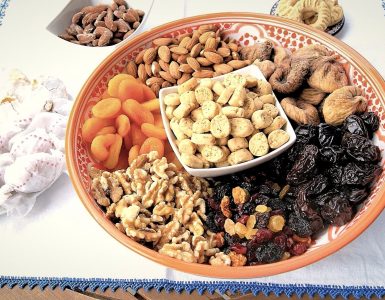 Jump to Recipe Krichlate, qrishlat, fqiqssat or q’iq’ats (كعيكعات) are crunchy miniature shortbread cookies. They’re sold in Moroccan markets and traditional bakeries throughout the year, but we mostly...

A fabulous Moroccan dish of stewed chicken, lentils and onions served on a bed of shredded msemen, trid pastry or bread. A fragrantly seasoned broth is poured over all. 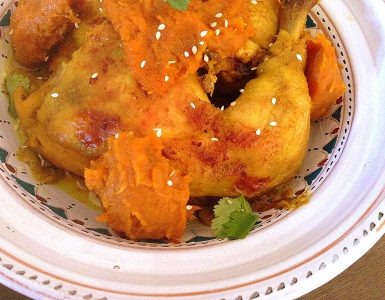