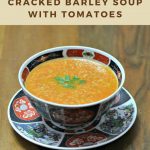 Barley grits, also known as cracked barley, are a kitchen staple in many Moroccan households, where they often get cooked into savory soups such as zesty, peppery Hssoua Belboula Hamra. For this recipe, the barley is cooked until tender along with tomatoes, onions and Moroccan seasoning.

It’s perfect as a light supper on a night when you’re not in the mood for much fussing in the kitchen but want something hot, delicious and satisfying.

Of course, you need not restrict yourself to serving the barley and tomato soup in the evening. In some families, savory porridge-like soups such as Moroccan Barley Soup with Milk or hearty broth-based soups such as Harira are also standard breakfast fare.

For this recipe, large barley grits (referred to as dchicha) are best if you want a lot of chewy bite to the soup; otherwise, medium-caliber grits are fine.

The recipe calls for a little lamb or beef, which may be replaced with chicken or omitted for a vegetarian version. For added flavor, replace some of the water with broth or stock (I use stock cubes), adjusting salt as necessary. Tomato paste is optional, but it will add color and richer tomato flavor.

As with many grain-based soups, this one is best served immediately after cooking because the barley grits will continue to swell and thicken as the soup sits. Add water (and a little more seasoning if needed) to thin the soup when reheating. 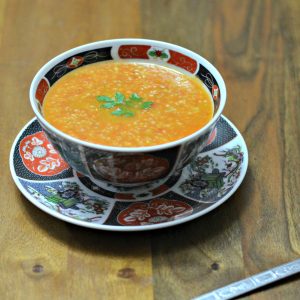 My husband loved it. Thank you.

I love this recipe. The only problem on Massachusetts I had to send to Colorado for cracked barley. Now that I'm back in Morocco, no problem.

Hi Jan. I really enjoy this soup, too. I didn't realize that it can be so difficult to find cracked barley! We're definitely spoiled here in Morocco.

The directions call for grated tomato, but, there is no grated tomato in the ingredients list. How much tomato do you use? Thank you

Thanks for catching the error. I've updated the recipe to show 2 or 3 tomatoes in the list of ingredients. Soft, ripe tomatoes are best as they grate the easiest.