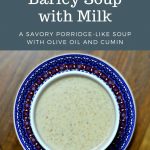 Barley grits (belboula in Moroccan Arabic or semoule d’orge in French) is a common grain in Morocco, where it’s used to make sweet or savory porridge like soups (hssoua), breads and even couscous.

In this recipe for a savory version of Hssoua Belboula, barley grits are cooked until tender with olive oil and cumin. Milk, butter and evaporated milk are added at the end of cooking to richen the barley soup and give it a creamy quality.

I prefer medium caliber barley grits when making hssoua. Fine grits will cook more quickly and result in soup with less texture while large grits may take longer, require a little more water, and will hold their shape with chewier texture.

Be careful not to confuse evaporated milk with sweetened condensed milk. In Morocco you’ll find unsweetened evaporated milk sold as Lait Concentré Non-Sucre under the brand name Purisima. A small 160 ml can is appropriate for this recipe but larger cans are available. If you don’t have any on hand or want to omit it, see the Recipe Notes to make the necessary adjustments.

Serve the soup for breakfast or as part of a light evening meal. If desired, you can garnish it with a swirl of olive oil or melted butter and a dusting of cumin. 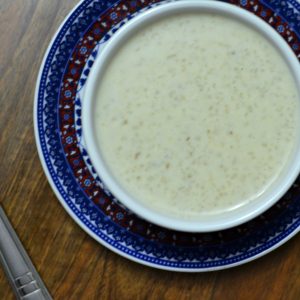 My husband actually liked this recipe too.

Is this sometimes cooked with oregano or thyme? I've had this in restaurants with breakfast, and there's some kind of herb in it.

Yes, it can indeed be made with those herbs.