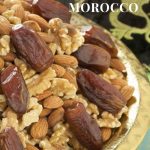 In Morocco, there’s no mistaking when the Islamic lunar month of Muharram draws near. It’s the time of year, not long after Eid al Adha, when the startling, noisy blast of firecrackers can be heard throughout the day and into the night.

Contents hide
1. Importance of the Islamic Month of Muharram
2. Ashura in Sunni Islam
3. Ashura in Shiite Islam
4. Ashura in Morocco
4.1. Ashura Gifts and Festivities for Children
4.2. Ashura Pranks and Zamzam Day
4.3. Moroccan Food on Ashura
4.4. Bonfires and Games on Ashura

Importance of the Islamic Month of Muharram

Muharram is an important month to Muslims. From a religious perspective, Muharram is one of four holy months and a time when Muslims are encouraged to perform optional fasts, avoid fighting and avoid unlawful acts.

From a historical perspective, Muharram is meaningful as the month when Muslims fled persecution in Mecca and migrated to Medina. The migration—or hijra as it’s referred to in Arabic—provided a reference point for establishing an Islamic lunar calendar, with the first of Muharram marking the beginning of each Islamic New Year.

The day of Ashura takes its name from the literal Arabic word for “tenth,” which is ashura.  In the Islamic context, Ashura refers specifically to the 10th day of the lunar month of Muharram.

Sunni and Shiite Muslims observe the Day of Ashura differently.

In Sunni Islam, Ashura is significant as the day that God saved Moses and the Israelites by parting the Red Sea and drowning Pharaoh. Many Sunni Muslims observe the occasion with an optional fast on the 9th and 10th of Muharram, hoping for the reward of having their previous year’s sins forgiven.

Most Sunni scholars note that fasting should be the only way—if at all—that Muslims observe Ashura. These scholars object to cultural traditions associated with Ashura because they were not practices of either the Prophet Muhammad ﷺ or his companions.

Shiite Muslims observe Ashura, the 10th of Muharram, for an entirely different reason—it marks the day that Hussain, son of Ali and grandson of the Prophet Muhammad ﷺ, was killed as a martyr at the Battle of Karbala.

Ashura is a major festival of self-reflection for Shiites, who might commemorate the tragic death of Hussain with outward displays of grief and ceremonial mourning. For some, this includes passion plays and light, symbolic striking of the chest, which replaces a discouraged practice of self-flagellation with chains.

Despite the objection of Islamic scholars, Moroccans tend to observe Ashura with a wider range of religious and cultural Ashura traditions than what’s found in other Muslim countries.

In addition to commonplace spiritual observances such as fasting and giving charity, many Moroccans also adhere to cultural practices that date back centuries.

Ashura Gifts and Festivities for Children

For example, many view Ashura primarily as a festive day geared toward children. Children highly anticipate Ashura as a time for gifts of toys, money, and perhaps new clothes.

As such, toys are prominently displayed for sale in supermarkets and neighborhood shops, and the sound of small drums (taarija) and firecrackers can be heard in most neighborhoods.

Companies might organize celebratory events and parties for the children of employees, complete with games, gifts, and live entertainment.

In some areas, children follow the tradition of baba ashur, going door to door to collect handouts of dried fruit, sweets, or money.

Following the collection of pocket change, some kids will buy single eggs to throw at friends. Other pranks, too, are common, especially those involving water.

This is likely a nod to the fact that in some areas, Moroccans refer to Ashura as Zamzam Day. They have a custom of sprinkling family or neighbors or schoolmates with water as a playful tribute to the holy water from zamzam, a well in Mecca that has not run dry in thousands of years.

Some carry it a bit further and have a friendly water war. These traditions are believed to be influenced by Moroccan Jewish observances connected to Yom Kippur, when water, too, is regarded as holy and might be used to bless one’s family and personal belongings.

Unfortunately, water splashing and other pranks on Ashura can take a nasty turn. Unsuspecting passers-by might instead find themselves drenched by an entire bucket of water or other liquid, or perhaps bombarded with raw eggs.

Certain Moroccan food traditions are connected to Ashura. Krichlate, a bite-sized cookie, is famously served on Ashura alongside dried fruits, nuts, and sometimes other sweets in a presentation referred to as fakia.

Depending on region and family, certain traditional dishes might be prepared, among them couscous with either gueddid (dried strips of meat), kourdass (meat dried within a casing), or mjabna (dried stuffed tripe).

The dried meats would have been prepared and preserved several weeks earlier on the occasion of Eid al Adha.

Bonfires and Games on Ashura

In some tribal areas in Morocco, Ashura has become a day of feasting and games. Families sometimes slaughter an animal to mark the occasion and traditional games—including water splashing—are held throughout the day and night.

And, all across Morocco, bonfires might be lit. Many view the fires and related activities as symbolic, harmless fun. In some areas, however, the fires remain connected to sorcery and specific magic rituals that are practiced on this day.

Great work! Informative, educational, and accurate. You sure have done your homework

This is a fantastic article, my friend!