If you’re not familiar with bottle gourds or how to cook with them, you’re not alone. These mildly flavored, squash-like gourds certainly weren’t part of the American cuisine of my childhood, and when I first encountered them in Morocco years later, I had no idea what they were called in English.

Other Names for Bottle Gourds

As I later learned, the term “bottle gourd” aptly describes the shape of the edible gourd, but it’s not the only appropriate name to use. Elsewhere in the English-speaking world they might be called milk gourds or calabash (this latter term is usually used for rounder gourds), while in Italy they’re known as cucuzza, in India as lauki or dudhi, and in China as hulu or hizi.

Here in Morocco they’re known in Moroccan Arabic as slaoui (singular: slaouia) or by a combined French-Darija name of courgettes slaoui. Moroccans tend to use the pale green gourds in cooked salads or stews such as Tagine of Slaoui, and some like to add them to couscous dishes as well. Although primarily a summer produce, their season is actually quite long; in Casablanca, for example, we can usually find them in markets from spring through late fall.

How Moroccans Use Bottle Gourds

Since one of the hallmarks of traditional Moroccan cooking is frugality—in general, very little goes to waste—it surprised me to see that a significant portion of each bottle gourd is discarded. (This is in contrast to other cuisines such as Indian, where the entire gourd is used in various ways.)

For starters, the neck of a slaouia is typically too firm to cook to desired tenderness in Moroccan dishes, so it’s cut off and thrown away. Conversely, the spongy, seedy interior of the bottle gourd’s body will turn to mush when cooked, so it’s scraped out and discarded as well. The remaining hollowed-out flesh is then cut, diced or sliced as desired before it makes its way to the pot. The end result is similar to zucchini in flavor but with a texture that retains shape even when cooked to a very tender state.

The Moroccan Method for Cleaning and Prepping Bottle Gourds

The photos below show the process of cleaning and preparing bottle gourds for use in Moroccan recipes such as Bottle Gourd Tagine or Bottle Gourd Salad. Allow 10 to 15 minutes of prep work for each kilogram of bottle gourds. This work may be done a day or two ahead of cooking. 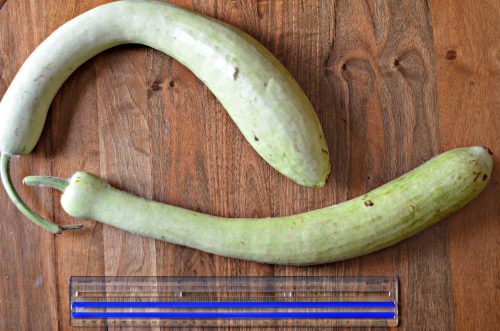 Fresh bottle gourds should have pale green skin with relatively few imperfections or blemishes. Squeeze to be sure that they’re firm from the neck to the base. In Morocco, bottle gourds can be found as small as six inches in length, but usually they’re much larger. Together, the two gourds shown above weighed 2.8 pounds (1.3 kilograms). I placed them next to a 12-inch (30 cm) ruler to show how slender and long they are.

Often, however, the base of a bottle gourd is significantly rounder than the neck, giving it a bottle-like or bowling pin shape like the ones at the top of the page. In either case, the neck and body might grow straight or curved. 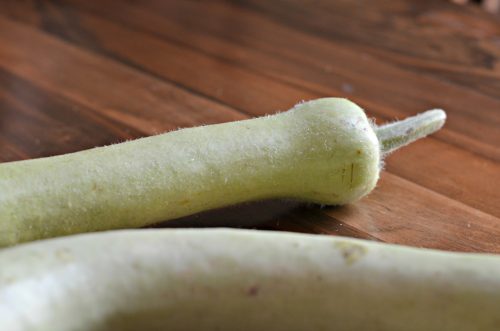 The skin of bottle gourds (slaoui) is smooth but covered with fine hairs. Photo © Christine Benlafquih | Taste of Maroc

Although the skin of the bottle gourd is smooth, on closer inspection you’ll see that it’s covered with fine hairs that give it a fuzzy appearance. Don’t worry if you find that unappealing; the skin will be peeled and discarded. 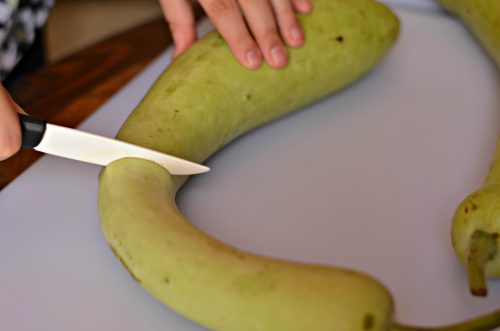 Because the neck is typically thicker, firmer and without the spongy interior that’s found in the rest of the gourd, we usually remove and discard it. However, since these slaoui were so slender that they lacked a distinctive bottle shape, trying to determine where the neck ends and the seed-filled body begins required some trial and error. 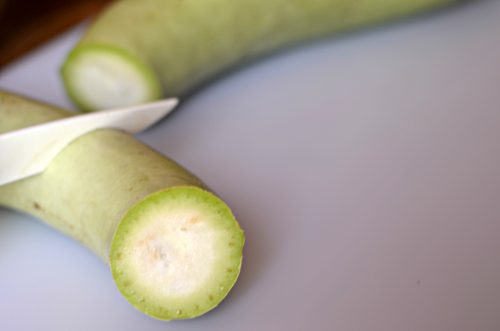 Visible seeds indicate that some of the bottle gourd’s neck is good to use. Photo © Christine Benlafquih | Taste of Maroc

In the long section of neck that we removed, we can see a spongy interior with seeds, which means that some of the neck is actually okay to use. So, we cut a little further up to locate the point where the usable portion begins. 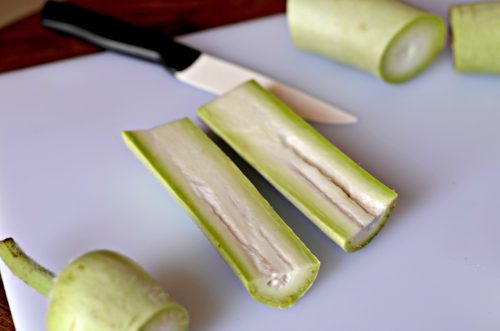 The section of bottle gourd neck with seeds is fine to use. Photo © Christine Benlafquih | Taste of Maroc

Cutting the new section of neck in half lengthwise reveals the point where the spongy flesh begins. If you press on the section without seeds, you’ll detect where it becomes notably firmer. We’ll trim off and discard that denser section and reserve the part with the seeds. 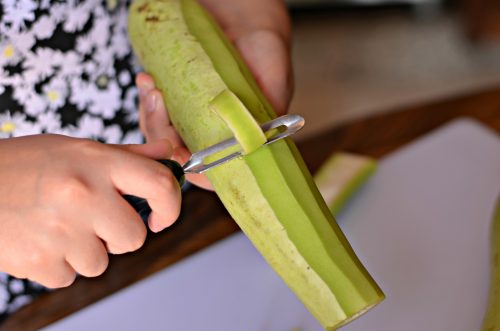 You now want to peel the edible portions of bottle gourd with a vegetable peeler or paring knife. This reveals a bright green layer, almost chartreuse in color. The new layer is moist and slippery, so be careful as you finish peeling the slaoui.

Trim the Ends and Cut Into Smaller Sections 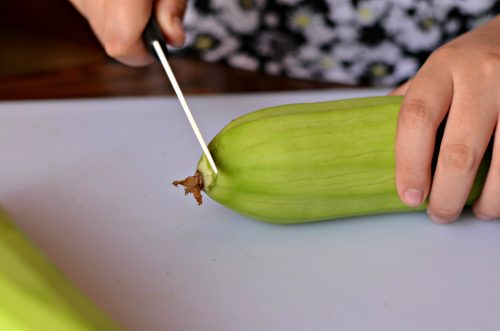 Trim the tip off the base of the bottle gourd. Photo © Christine Benlafquih | Taste of Maroc

Once peeled, you can trim off the tip of the base and pare away any blemishes. 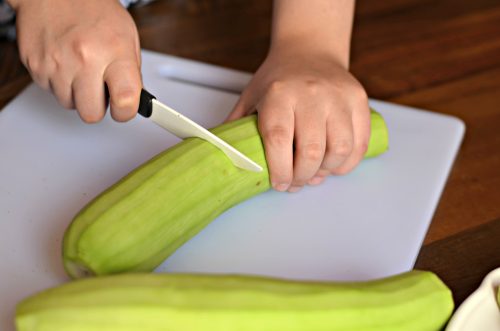 If the bottle gourds are quite large, cut them in half or into sections which are easy to handle.

Cut Sections in Half Lengthwise and Remove the Spongy Interior 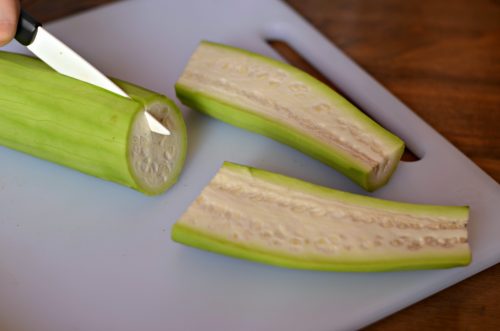 Next, each section of peeled bottle gourd needs to be cut in half lengthwise to reveal the soft, spongy interior. 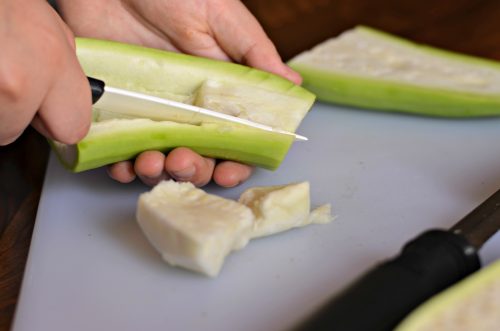 All of that seedy flesh will fall apart during cooking, so it should be cut out or scraped out and discarded. If it’s soft enough, you can even try pulling or raking it out with your fingers. Only the hollowed out bottle gourd will be used in Moroccan dishes. The intent here is to have as clean an interior as possible. I don’t worry about a stray seed or two or three, but according to Moroccan food writer Nada Kiffa, many Moroccans consider seeds in a dish to be a sign of a careless cook.  This line of thinking applies to other seedy vegetables as well, such as tomatoes and eggplants. 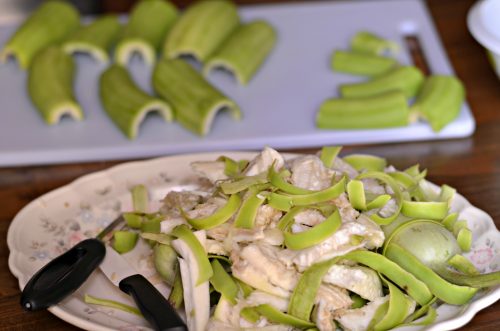 Much of the bottle gourd will be discarded. Photo © Christine Benlafquih | Taste of Maroc

Here you can see the what ends up in the trash bin. The discarded necks, skin peelings and spongy interior account for roughly half the weight of the bottle gourds. Rural families might use the unwanted pieces to feed livestock or add to compost; urban families sometimes bag such trimmings separately so they can be collected at trash pick-up locations for the same purpose. 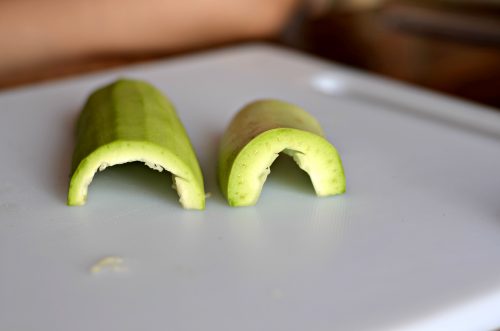 The hollowed out sections of bottle gourd are the only desirable portions for Moroccan cooking. The section shown above on the right is from the neck. Although usable, it’s visibly thicker and firmer to the touch, so will take longer to cook than the section on the left. I sorted out those thick sections and froze them for later use in couscous.

Slice or Dice the Bottle Gourd 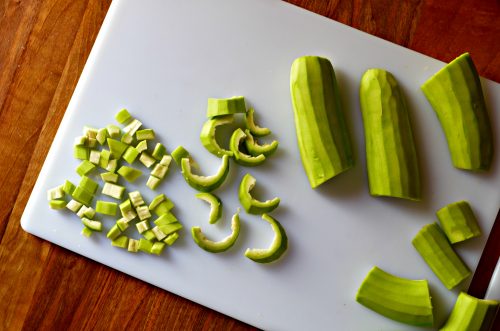 Depending on the intended dish, you can now cut the slaoui into cubes, slices, or leave in large sections. I like to dice the bottle gourds for cooked salads, thinly slice them for tagines, and leave large pieces intact for use in couscous. This is not written in stone, however, and how the slaoui is cut or sliced will vary from cook to cook.

Use or Store the Prepped Bottle Gourd

It’s best to use fresh bottle gourds within several days of buying. While you can store whole bottle gourds in the fridge until needed, they take up a lot of space. Therefore, you may find it more convenient to clean and prep the slaoui the same day as you brought them home from the market.

The prepped bottle gourds will keep well in an airtight container for several days in the refrigerator. You can also freeze them for later cooking.