I first became acquainted with bottle gourds (slaoui; singular slaouia) in Morocco, where they’re a popular summer vegetable to use in cooked salads, couscous or traditional stews such as the Bottle Gourd Tagine Recipe featured here. Fresh tomatoes, garlic, ginger and saffron are key to the zesty good flavor of the dish, which purposefully yields abundant sauce ideal for sopping up with Moroccan bread.

To prep the bottle gourds, you’ll want to remove the spongy interior in the same way you might want to remove the pulpy interior and seeds from a cucumber. How to Prep Bottle Gourds for Moroccan Recipes shows the process. Since this is a task that can be done several days ahead of time, the time involved is listed separately.

The cooking time is for preparation in a pressure cooker, which is how I usually see the dish prepared. Allow double this time if cooking in a conventional pot and up to triple the time if slow cooking in a clay or ceramic tagine. 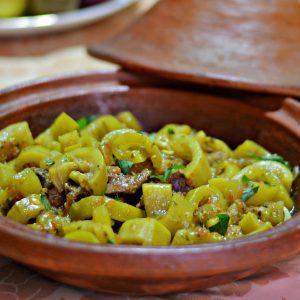 To Prepare in a Pressure Cooker or Conventional Pot

To Prepare in a Clay or Ceramic Tagine