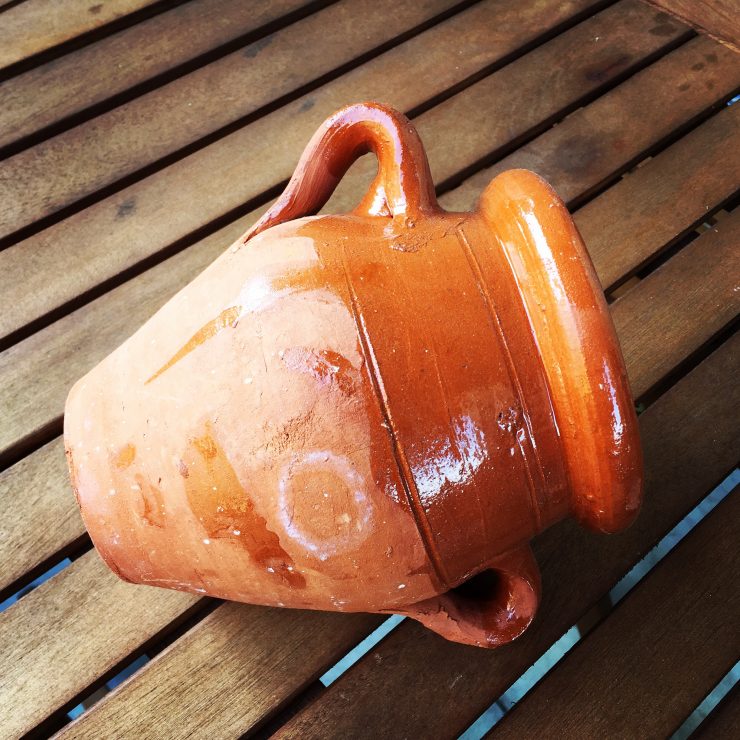 A tangia is a Moroccan amphora that’s used as a cooking vessel to make a confit-style stew. The cooked dish also goes by the name of tangia.

Moroccan tangia (also spelled tanjia) is not a festive dish. It’s a dish for friends, colleagues and groups of people who gather to break bread and enjoy time together without formalities. It’s a communal dish, so people gather around it to appreciate it better. It is an invigorating dish, subtly spiced and it can also have a sweet or tangy note (although not both at the same time). Tangia is not for people in a hurry as it should take its sweet time to cook and be ready to impress.

A tangia is cooking vessel as well as the dish that cooks in it. It is made of clay and has an urn shape. It comes in small and large forms, somewhere between 10 to 16 inches long. This glazed terracotta or clay amphora is a recipient dating back to Roman times. It was originally used to transport olive oil, but in Morocco it eventually became a cooking vessel associated with working men.

So tangia, like tagine, is a cooking vessel which gives its name to the dishes cooked in it. Both involve slow cooking methods; the tagine is ideally cooked over charcoal or a wood fire while a tangia is best cooked in the ashes from a wood fire. However, a tangia takes longer to cook as the meat must reach an exquisite confit texture while remaining intact. The meat used to make tangia should include bones, tendons and fatty matter that will become gelatinous after that long time cooking. Oxtails, neck, legs and trotters are cuts of choice.

Tangia is also called bachelor’s dish or bent r’mad, literally translated as “daughter of ashes,” as the tangia vessel is traditionally nestled into ashes for its long, slow cooking, where it’s nurtured until it becomes perfect. All the old people I asked seem to enjoy highlighting this name before getting on with the rest of the details.

Anyone can make a tangia, from amateur to experienced cooks. In Marrakesh, butchers often take care of it and you just need to pay them for the ingredients and bring your pot to the public oven. Depending on regional variations and taste preferences, tangia can be sweet, savory, tangy, sweet and sour at the same time.

The preparation of this dish traditionally required a gelatinous and tender meat; ideal cuts include the hock, the collar or a mixture of several pieces such as calf’s feet, calf’s tail, shank, cheek and tongue of veal. However, anything can be cooked in a tangia, including rabbit, chicken, lamb, etc. There is even a modern vegetarian version of tangia as well as a fish version in Tangier.

Wheat, beans or chickpeas can also be ingredients in tangia. Wheat berries are usually wrapped in a purse of muslin or cheesecloth, a reminder of the Moroccan Sephardic dafina or skhina for shabbat.

Liquid and Oils for Tangia

The tangia is cooked with very little liquid, using a long braising process known in French as à l’étouffée. Thus the meat becomes confit. This cooking method allows all the ingredients to mingle in an impeccable way. Hardly any water is needed—on average less than a cup to every two pounds of meat—and only a tiny bit of olive oil and Moroccan smen are added.

Spices and Condiments for Tangia

The basic spice is saffron, but a generous amount of ground cumin is used for savory versions. Preserved lemons and garlic are heavily used in this dish in its savory version, too. Most tangia recipes do not call for herbs of any kind. The sweet variety might include honey.

Onions make an entrance in some versions of tangia and so do potatoes, but generally this is a vegetable-free dish. Although this is a dish for meat-lovers, we have seen modern vegetarian versions making their way through the traditional ones.

A Dish for Men

Tangia was originally a dish prepared by and for working men, particularly in cities where craftsmanship was a prime economic activity. Athough Marrakesh seems to be the primary city associated with this dish and its vessel, we have versions of tangia in Meknes, Moulay Driss Zarhoun, Fez, Sefrou and Taroudant—cities and places famous for their conglomerations of souk traders and copper, wood, fabric and leather artisans.

Traditionally a group of artisans would pitch in the day before to buy all the necessary ingredients for tangia, then take it late evening or early morning to the fernatchi, the person in charge of the communal oven. These ovens are typically located adjacent to public hammams, Turkish or Moorish baths. The fernatchi would settle the tangia into smoldering ashes and leave it to cook throughout the night or early part of the day. At lunch time, when the shops were closed, the group of artisan friends would enjoy their tangia along with a good mint tea.

How to Prepare and Cook Tangia

Preparing a tangia involves several steps. First, we add all ingredients to the vessel, then shake or mix to combine. Next, we cover the amphora with craft or parchment paper and secure it snugly by tying it to the tangia with wire or string. Last but not least, we pierce the surface of the paper to create small holes which allow the steam to escape. The paper will not burn as the tangia cooks in very low heat. I forgot to poke steam holes once and ended up with too much liquid from a young cut of meat, which is not ideal in this dish.

In my modern kitchen, I use loose baking paper over the meat then cover the tangia with aluminium foil; this works just fine. The edges should be sealed properly and sometimes dead bread dough (without yeast in it) can be used to seal the sides, but I really do fine without it.

There is a mindset about this dish and the ritual around it. But again, we have to adjust to the life outside Morocco, so I cook it for 3 hours (depending on the content) in a 300 F/150 c oven and it comes out wonderful. If you don’t have a tangia pot, you can use a deep terracota pot or, for the confit texture and less the enchanting wooden flavor, a dutch oven. I tend to add a pinch of smoked paprika, which is a cheat touch to get some of that smoky taste. This method gets me closer to the real thing. Nothing replaces long hours of slow cooking in ashes, but we’re not far off. 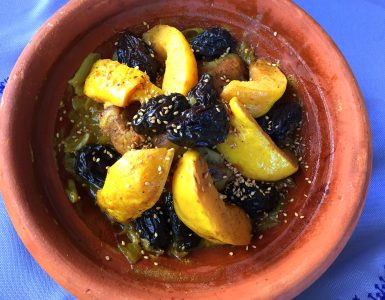 Jump to Recipe Moroccan m’qualli-style dishes that are served with sweet toppings or stewed fruits are prepared according to a precise codification. This codification includes a set of aromatics and even the type... 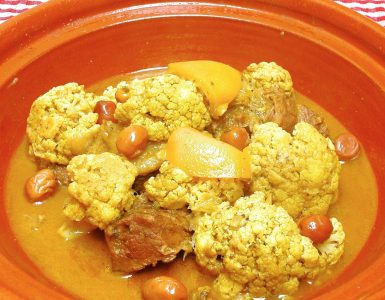 Moroccan Tagine of Lamb or Beef with Cauliflower

Jump to Recipe You might not think that cauliflower is the right kind of vegetable to add to a stew, but it works beautifully in this traditional Moroccan recipe for Lamb or Beef Tagine with Cauliflower. The light sauce... 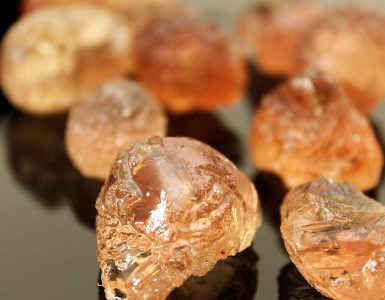 Jump to Recipe In Morocco the word awerwar refers to gum arabic or acacia gum, the hardened sap of the Acacia senegal and Acacia seyal trees, which are common to sub-Sahara Africa as well as Arabia, Egypt and West Asia...

This post may contain affiliate links. As an Amazon affiliate, I earn from qualifying purchases at no additional cost to you. Please see our Disclosure Policy