Seffa Medfouna is a variation of seffa, a well-loved Moroccan dish of steamed and sweetened couscous or broken vermicelli (chaariya) which is mounded on a platter and garnished with powdered sugar, ground fried almonds, raisins and cinnamon. In the case of medfouna, which means “buried,” saffron chicken, beef, or lamb is hidden within the decorated dome.

Presented that way, seffa medfouna is an impressive sweet and savory dish most likely to show up as one of several entrees at a special occasion or holiday meal. However, I do occasionally make it as a standalone meal for my kids.

In Casablanca, meat-free seffa is usually a follow-up course to a main dish. However, a vegetarian, nut-free version called seffa touba is served as a light dinner in Meknes and Fez. It’s sprinkled with orange flower water and offered alongside cold or warm milk. The milk is either enjoyed as a beverage to help wash down spoonfuls of seffa, or it’s mixed with seffa in individual bowls to make an instant soup or thick porridge.

Whether you use couscous or broken vermicelli for seffa medfouna, steaming in a couscoussier

is best for authentic results. Steaming plumps and tenderizes the couscous or pasta without making it sticky, wet or heavy.

The chicken or meat with saffron sauce is easy to make and will cook separately while you’re steaming the couscous or pasta. If you’re not familiar with the steaming process, please refer to the tutorials below: 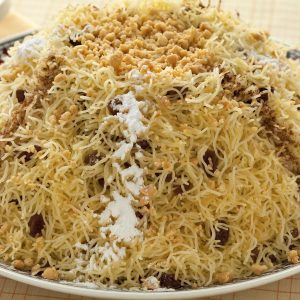 For the Couscous or Chaariya

Optional - If Including Raisins

For the Saffron Chicken or Meat

For Decorating and Serving the Seffa

I’m very excited to try this after loving it in Casablanca. Can the steamed vermicelli be made ahead of time? How far ahead? Thank you!

Yes, you can steam the vermicelli ahead of time and plan to reheat by steaming or in the microwave. You could do this earlier in the day or even the day before.

Did I tell you I made this and it was out of this world??? I made it with chicken. Tomorrow I will make it with lamb and beef. It was quite different from any other tajine I have ever made. I will let you know how it goes. It was quite the pain, though, to steam the noodles!

So glad you enjoyed it!

I so glad I found this recipe! We had Seffa Medfouna on our last night in Morocco and I couldn't believe that I nearly left the country without discovering this wonderful dish.

The recipe provided by Christine B. is straightforward and easy to follow. The dish does take several hours, but it is not difficult - just time consuming. I made mine with pasta (capelini/angel hair) which takes a little longer that with couscous. The result was impressive however. The steamed pasta is light and not at all stuck together and the 'found' cooked meat (I used pork) was tender and absolutely so tasty. It was a taste of vacation. I love it!

Hi Raymond. Thanks for taking time to leave a review. This is a favorite in our home but as you noted, it does take some time to prepare. I've loved this dish since tasting it for the first time more than twenty years ago. I always make it with the broken vermicelli rather than couscous.