My mother-in-law introduced me to this surprisingly tasty Moroccan Cabbage Tagine many years ago, and her delicious stewed cabbage recipe has remained in my cooking repertoire ever since. The cabbage is coarsely chopped into strips then stewed with lamb or beef in a zesty broth seasoned with ginger, paprika and cumin. Saffron is optional, but the preserved lemon and olives are essential to the dish’s classic, tangy flavor. A little cayenne pepper will add optional heat, but you may want to simply offer harissa on the side instead.

One medium cabbage is enough for this recipe. If you can only find a very large cabbage, consider using half for the tagine and the other half to make Moroccan Cabbage Salad with Chermoula. Or, you can use it to make Couscous with Seven Vegetables, which includes cabbage as a traditional ingredient. 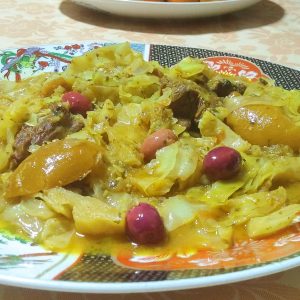 This recipe is delicious! My husband and I both agreed that this is probably the best Moroccan dish we've tried so far, and I've made about seven or eight others, all super tasty.

So glad you enjoyed it! This dish, along with couscous, were my introductions to cooking with cabbage. Both were real eye-openers when my mother-in-law showed me how to make them more than twenty years ago. Not all Moroccans make or know about this dish; it could be regional or family thing. Recently I prepared it for a group of Moroccan workmen who were in our home doing painting and other maintenance. Several had never heard of cabbage being cooked this way but all loved it, and one even wanted to know how to make it himself.