Chicken Rfissa is a variation of trid, a Moroccan dish which traces it origins back to tharid, a centuries-old Arab dish of stew and broth served over bread. While trid can take different forms, rfissa is specifically a chicken and lentil dish that’s served on a bed of shredded trid pastry, msemen, meloui (or rezat el kadi), harcha, or day old bread. When served over crumbled harcha, it’s referred to as rfissa medhoussa; when served over cubed bread, it’s called treda.

Rfissa’s signature broth is uniquely and fragrantly seasoned with Ras el Hanout, fenugreek seeds (helba in Arabic), saffron, and other spices. While not an elegant dish, it’s memorably delicious and regarded by many as Moroccan comfort food at its best. 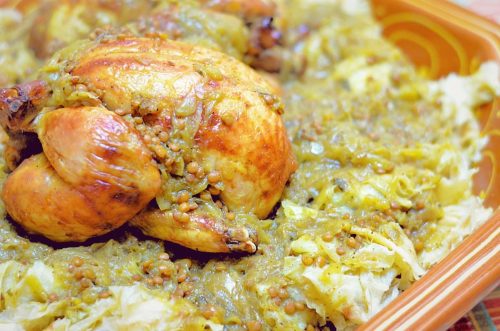 The chicken for rfissa can be served whole. Photo: Christine Benlafquih | Taste of Maroc

In some regions, a seasoning blend called msakhen is used instead of ras el hanout. Many consider the two blends to be similar, but msakhen includes herbs while ras el hanout does not. Msakhen also adds an element of heat, so it’s sometimes favored in cooler weather.

You’ll find rfissa served for family gatherings and casual company meals. It’s also traditionally served on the third day following the birth of a baby, due to the health benefits that fenugreek offers a nursing mother. Of course, it can be offered at other times as well.

The chicken and lentil stew is quite easy to make, but plan ahead to marinate the chicken (preferably overnight) and to soak the fenugreek. An organic, free range chicken is often preferred in Morocco, and it works best due to the long cooking time.

The shredded msemen or pastry is usually steamed in a couscoussier

prior to serving.  Both can be made and shredded ahead of time, then stored in the freezer until needed. Using leftover bread will reduce that prep time.

You might also want to try Bormache, a regional variation of rfissa that includes the addition of tomatoes, garlic and dried herbs. 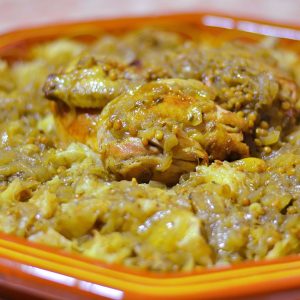 Christine Benlafquih | Taste of Maroc
A delicious Moroccan dish of chicken, lentils and onions served with broth on a bed of shredded pastry, msemen or bread. Plan ahead to allow all day or overnight marinating of the chicken. The trid pastry or msemen can be made ahead of time or while the chicken and lentils are stewing.
4.84 from 12 votes
Print Recipe Pin Recipe Save Recipe Saved!
Prep Time 1 hr
Cook Time 2 hrs
Marinating 6 hrs
Total Time 9 hrs
Course Main Course
Cuisine Moroccan
Yield 6 servings
Calories 614 kcal
Prevent your screen from going dark

Cook the Chicken and Lentils

Hi! Recipe sounds great. Planning to try. Can you specify on lentils? Or any type of lentils would do?Thanks

Good question! Green or brown lentils should be used; I've updated the recipe to specify that. Definitely avoid red lentils or you'll end up with a mushy mess.

Salaamz and first may I say that I find your recipes to be excellent-so well thought out and explained. Shukran ! I started seeing you on The Spruce and was impressed from the beginning. I have been cooking and baking Moroccan all these years but still find useful information and new ideas for my dishes in your recipes. And this is after being married to a Moroccan for 32 years. I especially enjoy your well written pieces about Moroccan culture which I find to be completely accurate and interesting. In the recipes I especially appreciate the detailed differences between pressure cooking, regular pot , and tajine ...all of which I use on a regular basis. I am not a big fan of making msemmen, so I make Jewish medium egg noodles instead and so far I have had only good reviews from my husband and the Magrebi crowd. It might be worth a try for people who have less time but still want to make r'fissa. for anyone who might be interested I made a short documentary about Moroccan Women it can be seen online here.

Salam Khadijah. Glad you find the recipes and articles to be helpful. And thanks sharing your suggestion of using Jewish noodles as a bed for rfissa...I can see how that would work well.

Sounds outstanding! Haven't heard of this dish. I'll give it a try. Thanks, Amitai

It's one of my favorites. Hope you like it!