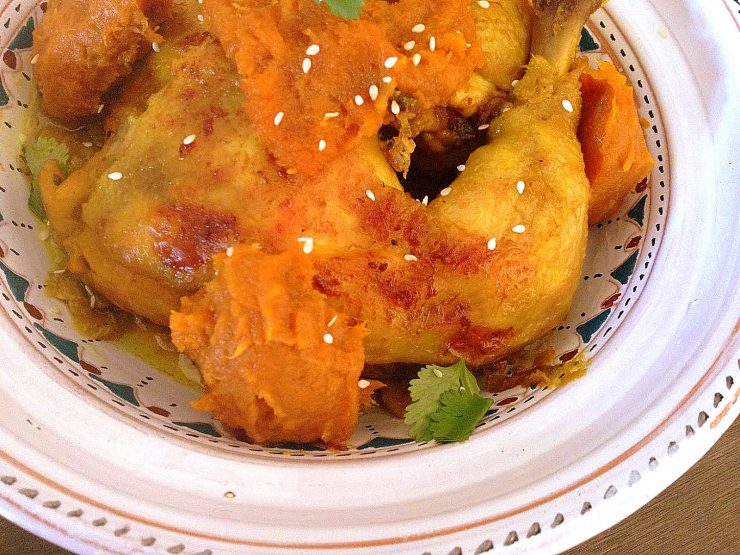 This sweet and savory Moroccan dish features chicken, lamb or beef cooked m’qualli-style then garnished with a warm Moroccan pumpkin paste. The chicken version in particular is associated with Eid Al Mawlid, the remembrance of the Prophet’s ﷺ birth.

Eid al Mawlid is an important day in Morocco as it is an occasion to reflect on ourselves and listen to some religious chants. Eid al Mawlid follows the lunar calculation. Although not officially observed in many Muslim countries, Moroccan schools and some businesses do take a day or two off.

As far as food is concerned, we have a regional breakfast tradition of serving a classic warm assida, a sort of semolina porridge served with butter and honey. As for lunch, the traditional dish is this delightful chicken m’qualli with its mderbel of pumpkin. Some choose to make a m’qualli of meat instead of chicken—it’s the same recipe apart from the cooking time—but the chicken version is the one associated with eid while meat might be preferred the rest of the year.

This recipe is the combination of how to make a m’qualli for sweet dishes and the recipe for sweet Moroccan pumpkin paste. It’s as easy as that. 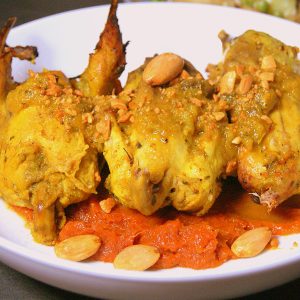 Nada Kiffa | Taste of Maroc
Cooked with lamb, beef, chicken or quail, this Moroccan m'qualli with pumpkin paste is a festive dish. In some Moroccan cities, the chicken version is served during Eid al Mawlid.Allow a quail, quarter of a chicken, or up to 1/2 lb. of lamb on the bone per person, and adjust the cooking time according to the type of meat used. The pumpkin paste can be made in advance. ( Link in recipe below.)
4 from 1 vote
Print Recipe Pin Recipe
Prep Time 10 mins
Cook Time 45 mins
Marinating Time 1 hr
Total Time 1 hr 55 mins
Course Main Course
Cuisine Moroccan
Yield 4 servings
Calories 765 kcal

Chicken (or Meat) and Marinade 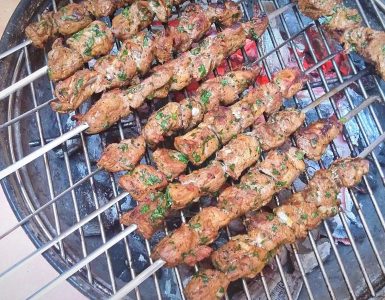 Jump to Recipe In Morocco, lamb or beef brochettes are known simply as kebab or by Arabic words for skewers—qotban, qodban and sfafed. They’re a popular street food year-round and a favorite when grilling at home... 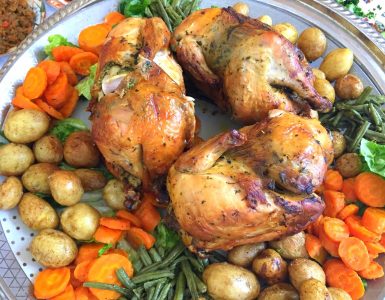 Chermoula adds zesty flavor to both the chicken and the spinach stuffing in this Moroccan steamed chicken recipe. A short roast in the oven gives beautiful color. 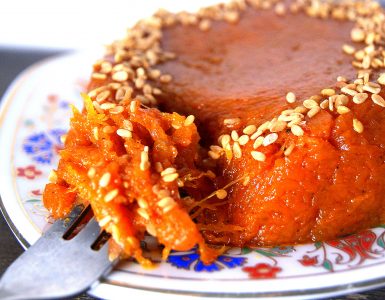 Jump to Recipe Mderbel of pumpkin (القرع المدربل) or gr’aa m’aassla/maassala) (القرع المعسَّل) is a delicious sweet Moroccan pumpkin paste with cinnamon. It can be served as a cooked salad or as a topping to...